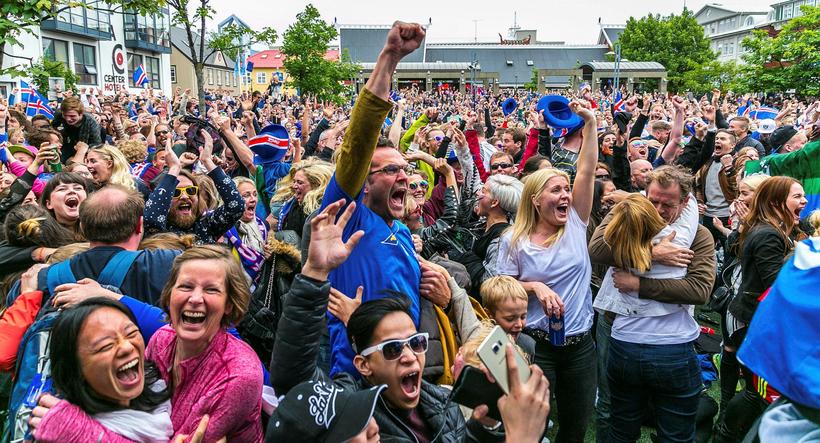 The crowd erupted when Iceland secured victory over Austria with a goal on the 94th minute. Árni Sæberg

As I walked out of my house, heading downtown to watch the Iceland-Austria match on a big screen at Ingólfstorg square, I heard singing. It was on. A group of men were singing Ég er komin heim , the unofficial anthem of the Icelandic national football team. They were preparing for the match.

I was a few minutes later than I meant to be (as tends to happen) and when I was walking down Laugavegur, the very few people on this usually crowded street all had the appearance of tourists. Perhaps unaware of Iceland making history in Paris.

As I drew nearer to the square and the big screen I met a sea of blue. It seemed more like 17 th of June, the national day of Iceland, where every other inhabitant of Reykjavik flocks to the centre, many wearing or waving Iceland’s flag. 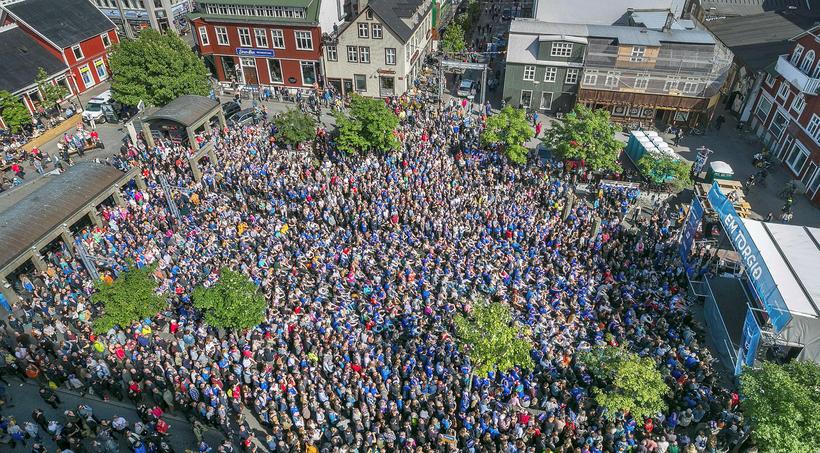 The crowd at the square was humming with excitement, cheering the team on thousands of kilometres away. There was absolutely no free space at the square, and I with all my average height could hardly see. A friend of mine solved the problem with her phone. We sat at the edge of the square, enjoyed the scene of blue, white and red, the electric atmosphere and the unity, while watching the game on a phone. It was quite something. The crowd at Ingólfstorg. Árni Sæberg

We decided to go to a bar to see the second half, ambitious as every bar with a television was full. We ended up in Gamla bíó, an old theatre where we stood at the gate of the hall, which was packed. The crowd was no less enthusiastic there, stomping a rhythm on the wooden floor of this old building, chanting Áfram Ísland, go Iceland.

The frustration and the tension of the crowd when Austria evened the score was palpable. Austria’s team is by no means a bad team, and a draw with them is not bad. It was even enough to get Iceland to the knockouts. But Iceland wanted more, they wanted the win. In the mind of every single Icelandic person they deserved it. 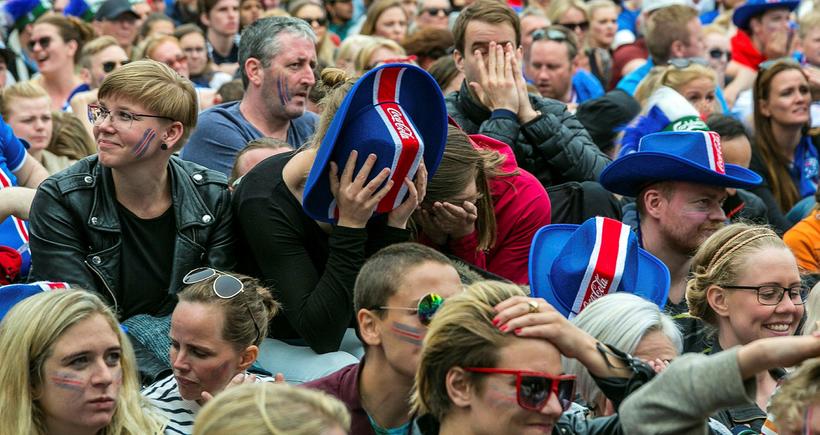 The audience was not happy when Austria scored a goal against Iceland. Árni Sæberg

The eruption of sound when Iceland scored and secured a win, with just over 20 seconds left on the clock, would have made a volcano proud. People stood up and yelled for the team, for football and for this small Island we live on. After the screaming died down, some minutes later, people started congratulating each other, hugging and shaking hands (no matter if they knew each other or not). Going out to the street to hug and shake hands with more people, streaming out of other bars and buildings.

The presence of victory could be felt throughout the day. Every half hour or so, a person in a bar would spontaneously start to chant Áfram Ísland or to sing Ég er kominn heim, the surrounding people chiming in.

The nation is taking a break from bickering over political scandals, offshore accounts and even the presidential elections (which takes place three days from the Austria match). Football is the only thing on people’s mind these days, one nation, one team and the next game. Who cares about the rest right now?