A month ago, a colleague of mine celebrated their birthday and brought some ice-cream into work for us all to enjoy. And jolly nice ice-cream it was too. I decided to take a break from complaining online about the Icelandic weather and the driving ‘skills’ of my new compatriots and write a status (on a well-known social medium) publicly praising Iceland’s most excellent ice-cream.

I clicked ‘Post’ and sat back in lively expectation of replies of grateful thanks and deserved triumphalism. But, no. Instead, the first reply was: “But are you an Emmess or Kjörís man?”

What, what, what?! Was I really being asked to pledge allegiance to one given brand of Icelandic ice-cream, forsaking all others? Clearly complimenting Icelanders or Iceland generally is not sufficient. I must choose my camp.

My initial thought – quite naturally – was that this was a light-hearted, tongue-in-cheek response complete of itself. But, no (again). Other Icelanders immediately piled on to the ‘debate’ (remember, we’re talking ice-cream here) at a level of passion and earnestness that would have put the stormers of the Bastille to shame.

Since the harrowing spectacle of this virtual Icelandic fist-fight, I have put the ‘ice-cream question’ to other unfortunate locals crossing my path. And sure enough, the pattern repeats itself. Not only have people taken the trouble of selecting their own personal ice-cream denomination, they speak of other ice-cream brands with such bile that one would think all other products were laced with razor blades.

“You must take a position, Charles. You can’t just like everything,” I have been told.

Luckily, nowadays, the halberd and the axe have been replaced by the ice-cream scoop and chocolate sauce, but the issue seems roughly the same. Why this need to draw battle-lines where essentially there are none? Why must every field of existence be split into (at least) two opposing armies? Why create active conflict when polite indifference would do just as well?

I would perfectly understand comments such as, “I find X ice-cream tastier than Y ice-cream”. But not, “I hate X ice-cream because (insert spurious reason, usually related to politics, geography or money here) and I NEVER buy it.” Seriously? Do people here really have so much time on their hands that they can afford to have burning feelings on frozen dairy products?

Even more disturbingly for a grammar geek like me, this phenomenon appears to have seeped into the Icelandic language. Take politics, for instance. People rarely say, “I vote for X Party”, but rather “I am an X Party-man/woman”. For me, politics is a verb – I debate, I analyse, I compare, I vote. In Iceland, politics has become a noun (a label, indeed). People here do not seem to vote for a political party; the political party has become an integral party of the person’s personality and psyche. Call me silly, but I find that sort of thing a bit creepy…

Of course, we can all find examples of these kinds of blind tribalism in any country in the world (particularly as regards politics), but for me the Icelanders have taken the thing to uncomfortable heights.

I enjoy feeling part of a group as much as the next man, but I don’t feel the need to carpet myself with labels connected to every aspect of my life. I want to be able to eat any brand of ice-cream without having first to obtain validation from those around me. I want to be able to change my mind. I want to be able to be indifferent about things. I want to maintain a certain degree of mystique about my thoughts, feelings and tastes. I don’t want to have to tattoo Kjörís on my forehead and Manchester United on my bottom just to fit in.

For a country of just 320,000 people, this divisive tribalism is most odd. Particularly when you see the selfsame Icelanders abroad. Out come the red-white-and-blue flags and suddenly they’re all part of one brave island nation and people. But as soon as they’re back home, they’re burning down each other’s houses over what dairy company to patronise.

Are Icelanders a ‘nation’, or even a ‘people’? Or are they a loose confederation of warring factions held together by the glue of disdaining everything foreign to a slightly greater extent than they hate each other?

No offence (cue offensive observation), but an excess of passion and enthusiasm is frankly – to use an old-fashioned term – common.

From the safety of my computer keyboard, this advice I send out to Icelanders: stop making an argument out of everything. Don't react when somebody says they're an Arsenal supporter. Have a try at saying, “I’m sure ALL political parties have something positive to contribute to society.” Offer your friend a spoonful of your Kjörís in return for a spoonful of their Emmess.

Learn (just sometimes) how to be indifferent about things. It’s a lot classier. 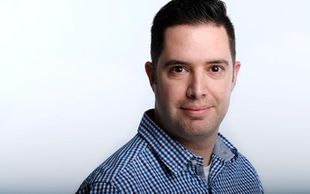 Charles has worked as a journalist since February 2015, writing English-language news items for mbl.is. He has a Master’s degree in Modern Languages from Oxford University (UK) and a BA degree in Icelandic from the University of Iceland. @CharlesGittins