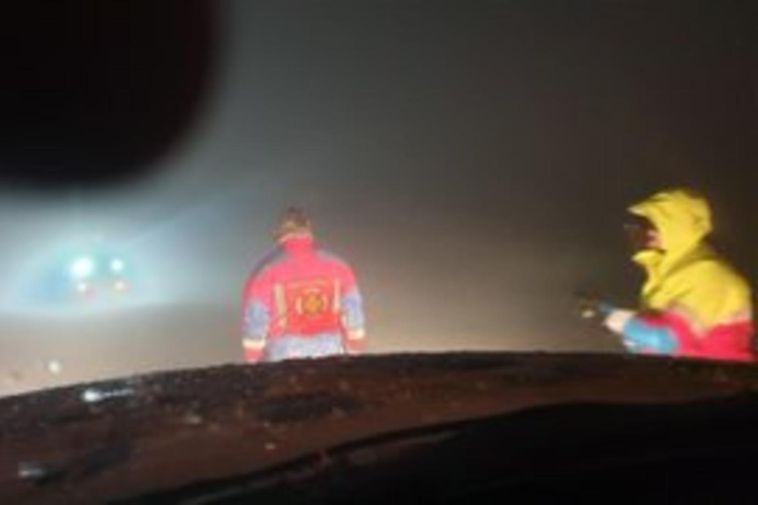 “The company, we think, is reckless, and this trip should have been cancelled,” states one of the tourists caught in a blizzard at the base of Langjökull glacier Tuesday night. He was part of a group of 39, taken on a snowmobile trip by Mountaineers of Iceland, despite a blizzard warning.

Barry Maxey spoke with Iceland Monitor from the departure lounge at Keflavík International Airport, where he and his partner Michelle Smith were waiting for their flight back home to England around noon.

They were in the same group of eight as Richard Gonsalves and his wife Sarah, also from the UK, along with four people from Brazil – two of them children. Gonsalves sent Iceland Monitor an account of the ordeal this morning, which we published here.

When asked if his group was told of the weather warning, Maxey responds that the driver of the bus from Reykjavík told them that a blizzard was in the forecast.

While they were at the base of the glacier, the storm hit. “We buried ourselves in snow,” he states, “to keep warm.” When asked whether they were advised to do so, he responds, “No, we just knew we had to.”

We ask if the tour guide gave good advice or guidance. “Zero,” Maxey responds. It appears that the more experienced guides were with other parts of the group. This one, according to Maxey, had no advice for the group of eight.

How did they make time pass while waiting for help? “By talking, saying positive things and jumping up and down, before we buried ourselves in snow,” Maxey responds.

He states that most of the tourists got frostbites, including him and his partner. Ms. Smith also sustained an ankle injury, as did others in the group. Everyone was in shock, he states.

When asked if they feared for their lives, Maxey responds, “Yes. If it weren’t for the rescue workers, we wouldn’t be here. They were on a level beyond human. They saved our lives.” He is immensely grateful to the rescue team and would like to give them a private donation. “Thank you is not enough,” he states.

After the initial shock, Maxey can’t hide his anger toward Mountaineers of Iceland: “We haven’t been to hospital,” he states.  “We were dropped off at our hotel yesterday midday and left to defend on our own.  No calls from the mountaineer company until just five minutes ago whilst sitting in the airport departure lounge.”

Despite the ordeal experienced during their first trip to Iceland, Maxey and Smith plan to visit again. “It will be in summer,” he stresses.