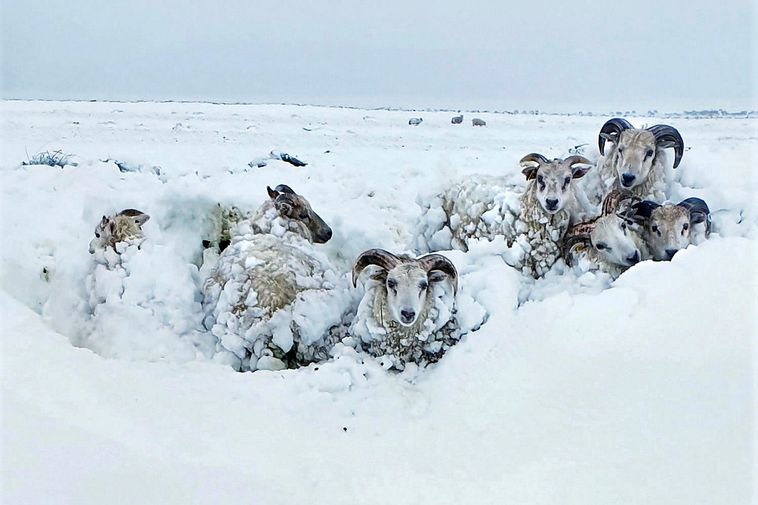 With the help of rescue workers, farmers at Hæli in Húnavatnshreppur district, Northwest Iceland, managed to save all their sheep that got stuck in snow in Tuesday’s blizzard, Morgunblaðið reports. Hundreds of sheep were in the fields close to the farm, and between 80 and 100 of them landed in ditches, where they were found stacked, one on top of another. Strong winds blew some lambs toward fences, where they got stuck.

“The weather was crazy, but we managed to save all the sheep on the farm,” states Jón Kristófer Sigmarsson, farmer at Hæli.

Early Tuesday morning, the snowfall started with strong winds, which got stronger as the day went by. The blizzard lasted into the afternoon, bringing an accumulation of up to 30 cm (a foot) of snow.

“When lambs land in a ditch, one of them usually sticks out,” Jón explains. “That’s why it didn’t take long to assess the situation and find the sheep. We, here at Hæli, believe we have retrieved every single one of our sheep. My daughter, who lives in Akureyri, came to participate in the search, and she found two or three sheep I didn’t know about. Now, all the sheep are in a safe place, waiting to be taken to the slaughterhouse, which will hopefully be in the next few days.”

He adds that his wife, Bergrún Ingólfsdóttir, noticed numerous mice around last week, but according to folklore, a number of mice in the fall forebode a cold winter. Prior to the blizzard, the couple agreed that severe weather was likely approaching.

Ten members of Blanda rescue team in Blönduós, Northwest Iceland, assisted farmers in Vatnsdalur valley yesterday in gathering their sheep. “We’re providing assistance at two farms in the valley,” states rescue worker Þorgils Magnússon. “The farms at the highest elevation did get a considerable amount of snow in the blizzard.”