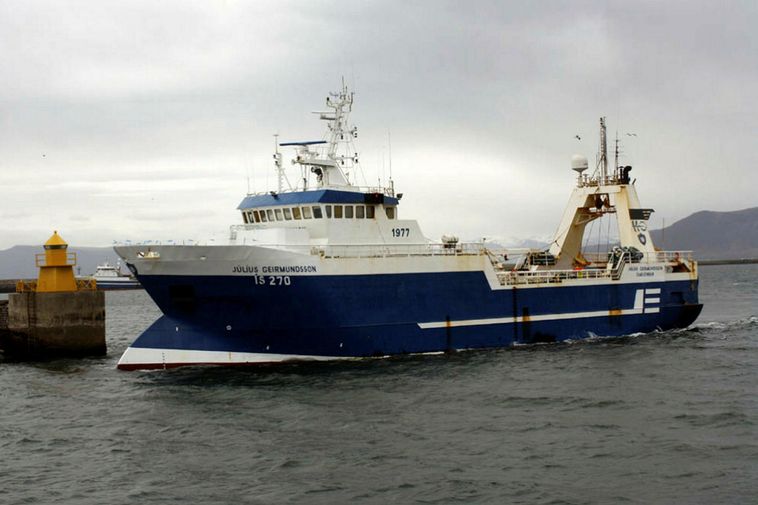 The West Fjords Police Department is investigating the case of the COVID-19-infected crew of the trawler Júlíus Geirmundsson as a criminal case, mbl.is reports. (See our report from yesterday here). This was confirmed by Police Chief Karl Ingi Vilbergsson.

Twenty-two out of 25 crew members tested positive for the coronavirus when the crew was finally tested, three weeks after the first men fell ill. One of the crew members told reporters that after learning they were infected, they were told to keep working. He stated the worst part was that men who were ill were forced to work.

In maritime law, the chapter on penal law states that a serious violation of the law can be punished by up to a four-year prison sentence.

By late yesterday afternoon, police had questioned most of the crew, mbl.is reports. They were questioned over the phone, since most are either in isolation or in quarantine.

The investigation is at an initial stage, and the plan is to question those in charge of Hraðfrystihúsið Gunnvör - the fishing company that operates the trawler.

The unions to which the crew belongs posted a statement last night, explaining they have decided to file charges against the fishing company Hraðfrystihúsið Gunnvör for its conduct and for its disregard for the request of health authorities regarding how to react to the cluster of infections on board.

“The unions agree it is necessary to thoroughly investigate the case, bring all facts to light, and have those face responsibility who made the decision to have the ship keep fishing instead of reacting in a responsible manner,” the statement reads.