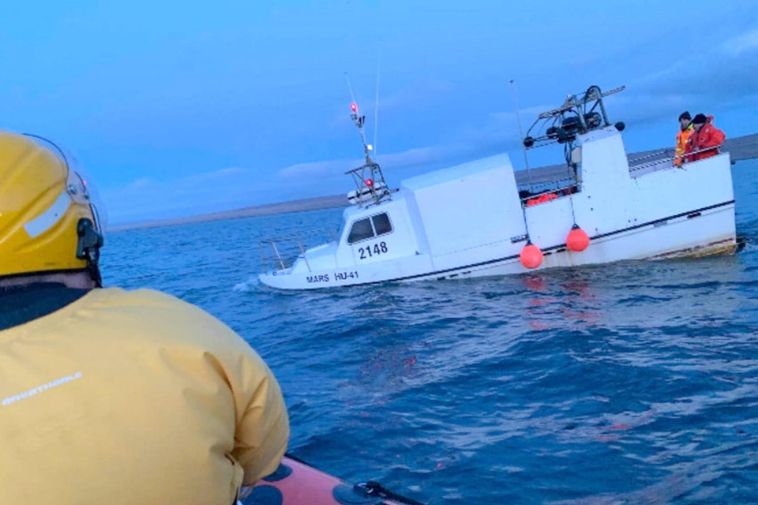 A stranded boat, near Hvammstangi, Northwest Iceland, last spring. Photo/From a report, done by the investigative board of transportation accidents.
Vala Hafstað
vala@mbl.is

Since the year 2000, 43 boats or ships have stranded off the coast of Iceland because the captain of the boat fell asleep. This is the conclusion of the investigative board of transportation accidents, Morgunblaðið reports. In 41 of the cases, small boats with a crew of four or fewer were involved, but in one instance, there were ten crew members and 13 in another.

Jón Arilíus Ingólfsson, who directs investigations of accidents at sea, states that before those accidents, each captain had on average been up 24 hours, and the longest time reported being awake before an accident occurred was 40 hours.

Jón Arilíus is quite concerned about this high number of accidents. He states we can be thankful that no fatalities resulted, but in some cases the boats were wrecked. He stresses how essential it is for captains to get sufficient rest and to take advantage of alarm devices on board.

According to Icelandic law, a helmsman is required on boats shorter than 24 meters if the boat is at sea longer than 14 hours in a 24-hour period.

A conference, organized by a council of specialists on nautical issues, is planned for March 19, where this problem will be addressed. Ásta Þorleifsdóttir, vice president of the council, points out that such accidents have far-reaching consequences: boats are destroyed, people lose their jobs, and the psychological impact on those involved is long-lasting.

The agenda of the conference will, among other things, include a discussion of alarm devices required for Norwegian boats, in addition to a presentation of promising Icelandic projects in this field.