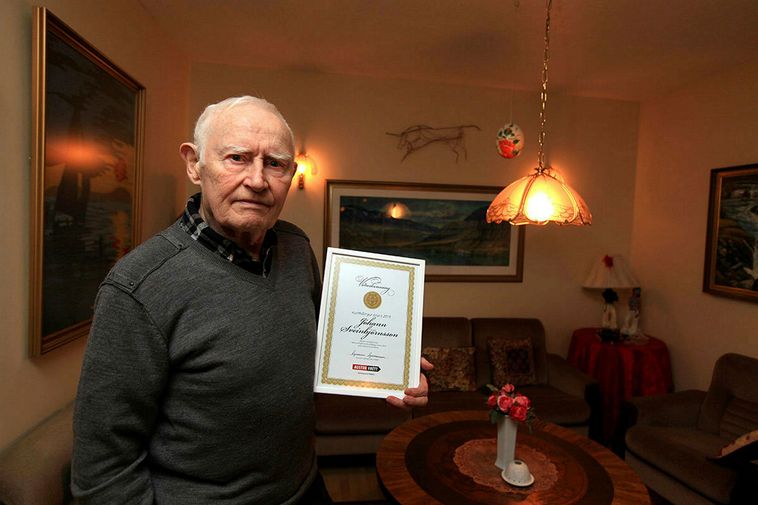 Jóhann Sveinbjörnsson, holding the certificate for being person of the year in the East Fjords. Photo/Austurfrétt
Vala Hafstað
vala@mbl.is

An 86-year-old man from Seyðisfjörður, Jóhann Sveinbjörnsson, was recently chosen the East Fjords person of the year by readers of the local news website Austurfrétt. His presence and attentiveness at a golf course in the evening of August 6 last summer saved a Swiss woman’s life.

“It was pure coincidence that I happened to be on the golf course,” Jóhann tells Austurfrétt. I had been to Egilsstaðir and Reyðarfjörður that day, and I sat down in front of the TV to watch the news. I was sitting comfortably on the couch here at home, shortly after 8 pm, when a program I didn’t like began. I said to myself, ‘This is so darn boring; I’m off to the golf course.’”

It was a trip that paid off. By 8:30 pm, he was at the top of the golf area, at the base of the mountain Bjólfur.

“I thought I heard birds calling,” he continues. “I heard the sound a few times, so I stopped and called out. I got a reply, but birds sometimes answer a call, so I kept golfing. Once in a while, though, I heard the sound and said to myself that this could be a human voice.

I felt I couldn’t ignore the possibility of someone being in trouble. I had a cell phone, but I didn’t want to call the emergency line, because I thought those were birds. That’s why I drove into town, to a police officer’s home, and got him to drive out there with me. We walked up to the place where I had heard the [sound] and called out in direction of the mountain.  We got a response. After calling for a while and listening, we agreed this was a human voice. That’s when he picked up the phone and called the emergency line.”

As it turns out, the cries came from a young, Swiss woman, who had plunged down the steep slope of a mountain, just beyond the Seyðisfjörður golf course. She had been lying there all day, calling for help, without anyone noticing.

Using a drone, rescue workers from Seyðisfjörður were able to locate the woman at an elevation of 150 m (490 ft), where she lay on a ledge, with part of her body immersed in water. She was very cold when help arrived. Had she not been discovered, she is not believed to have been able to survive the night.

She was transported by helicopter to hospital in Reykjavík. Jóhann states he learned that thanks to the prompt reaction of a doctor, she was saved from being paralyzed.

He received a post card from her last fall, thanking him. “At the time, she was back in Switzerland. She said she was learning to walk again,” Jóhann states.

He didn’t start playing golf until May of last year. “I never used to regard golf as a sport; I said I could just as well join a sewing club,” he admits.

He is grateful for the honor of being chosen man of the year in the East Fjords, but he stresses that the rescue workers are the ones who retrieved the woman.