Sunny Sunday and Warm Week Ahead 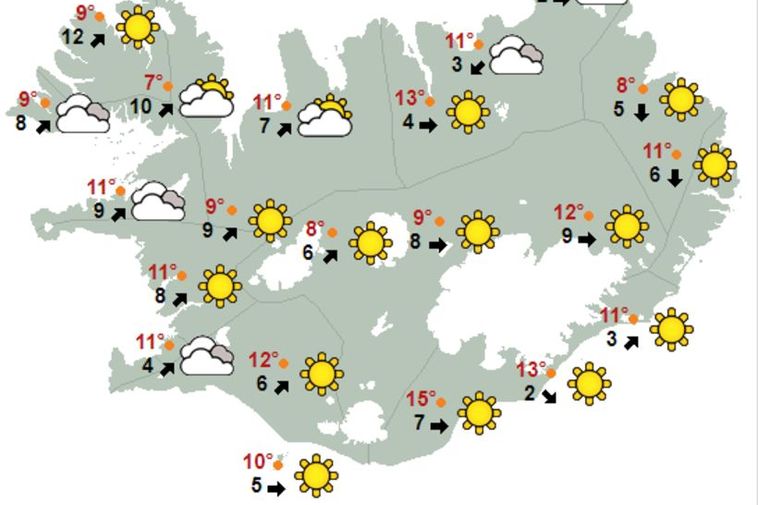 The forecast for 8 pm on Sunday. The Icelandic Met Office
Vala Hafstað
vala@mbl.is

The weather forecasts calls for sunshine and warm temperatures in East Iceland next week, starting Sunday, which will be welcomed, but cloudy and limited precipitation in West Iceland, where rain is severely needed. There will be sunshine in most parts of the country on Sunday.

The warmest day will likely be Wednesday, when temperatures as high as 20°C (68°F) are forecast for Kirkjubæjarklaustur in South Iceland and 17°C (63°F) for Egilsstaðir, East Iceland.

An uncertainty phase due to the threat of grass and brush fires in West Iceland remains in effect, according to the Icelandic Met Office. Although the weather forecast calls for some precipitation in this part of the country next week, it will likely be mostly drizzle. The Met Office meteorologist cannot guarantee that the precipitation will be sufficient to improve the extremely dry conditions in West Iceland, or improve the water level in salmon rivers. See our earlier report on the risk of wildfires and drought affecting salmon fishing.

People are asked to exercise extreme caution when handling fire in West Iceland.

Today, we can expect calm northerly or variable winds. There will be showers in most parts of the country, except for West Iceland. Mostly sunny in the south and west tomorrow. Temperatures will range from 7 to 17°C (45-63°F), warmest in the south.