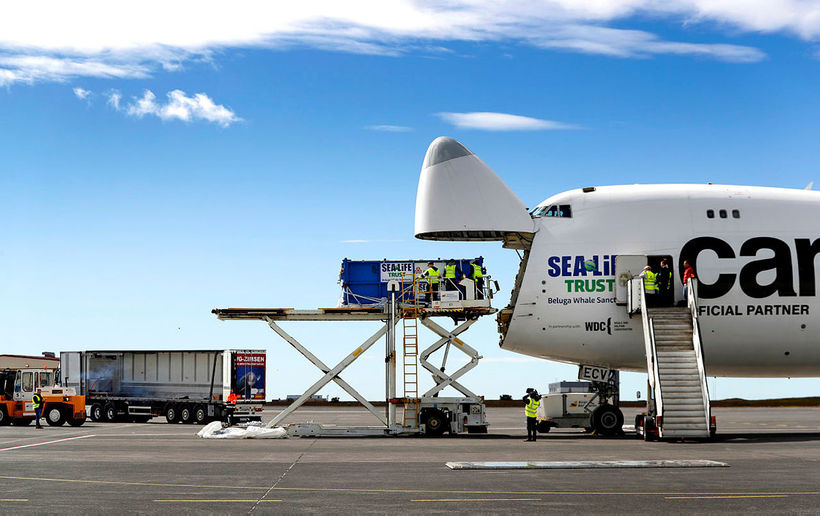 The whales had been living in the marine animal park Changfeng Ocean World in Shanghai since they were captured, at the age of two or three, off the coast of Russia in 2011. The plan is for them to make Klettsvík cove in Vestmannaeyjar islands their future home. Tourists will be able to observe them in their new home, which is a pen in the cove, the first in the world to be made for belugas. 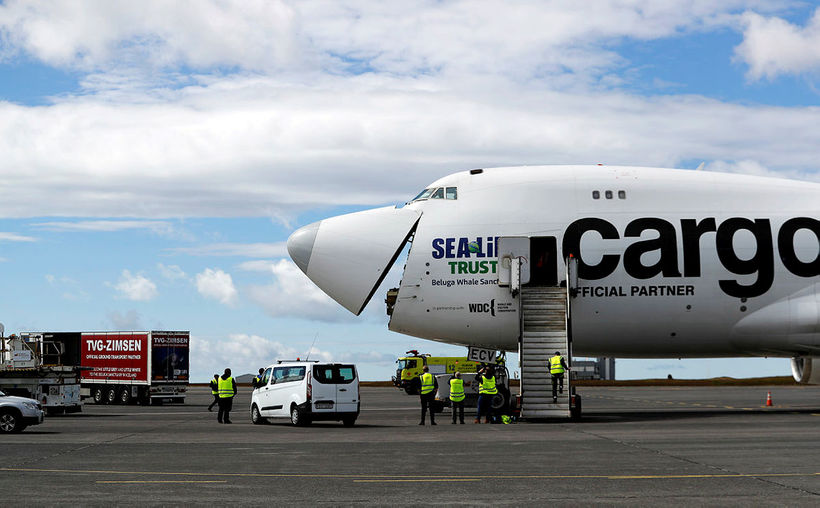 Looking a lot like a happy beluga. Eggert Jóhannesson

Representatives from Whale and Dolphin Conservation and Sea Life Trust – organizers of the project – awaited the sisters at the airport, along with reporters.

“This is the first time this has been done – these are the first belugas allowed to live in a marine pen following several years of captivity,” Cathy Williams, from Whale and Dolphin Conservation, told Morgunblaðið.

Andy Bool, head of Sea Life Trust, stated that Little Gray and Little White represent all the belugas in the world which have been captured and living in marine animal parks. He expressed his hope that by introducing this new way in caring for the animals in their natural environment, others will follow their example and do the same. 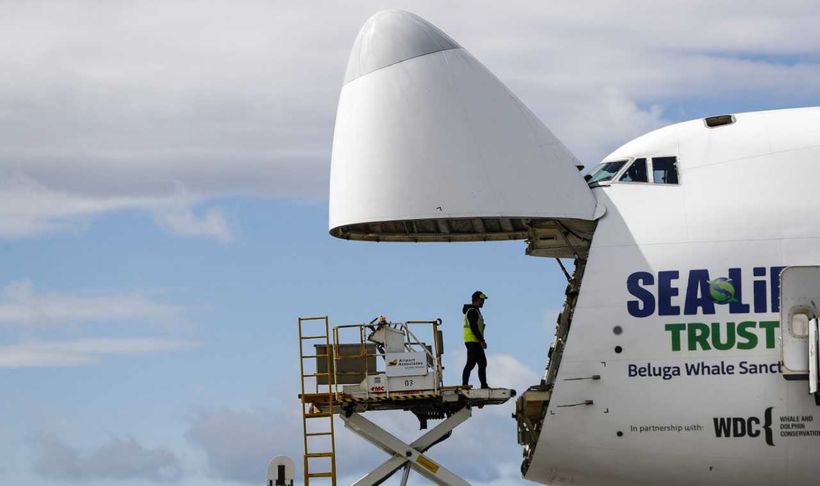 The sisters’ flight onboard a Cargolux jet from Shanghai to Keflavík was delayed about five hours, but the duration of the flight was ten hours instead of ten and a half. They were reportedly restless at the beginning of the flight, but calmed down as the flight proceeded. One of them even fell asleep during the journey. They landed in Keflavík around 2 pm yesterday.

Before landing at Keflavík International Airport, the aircraft circled Vestmannaeyjar islands. After landing, paperwork had to be taken care of. Representatives from the Icelandic Food and Veterinary Authority formally granted permission for the sisters to arrive, and veterinarians assessed their condition after the flight. 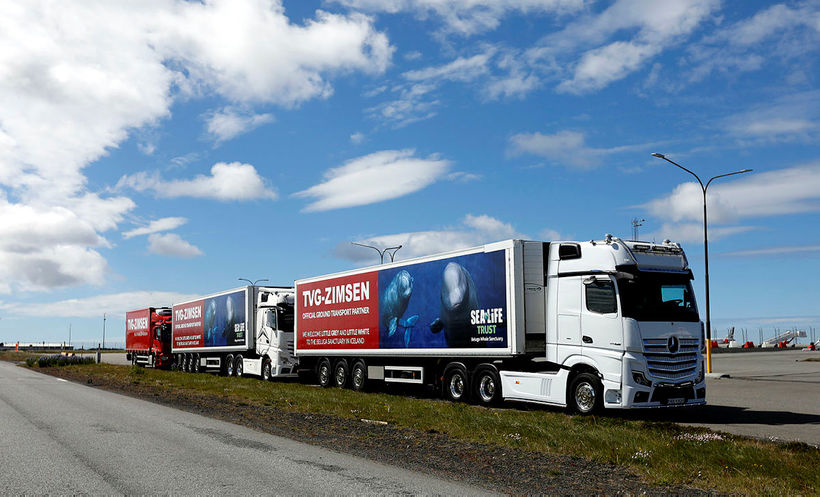 On the way to Landeyjahöfn harbor. Eggert Jóhannesson

Subsequently, the tanks that carried the belugas were transported from the front of the jet onto modified trucks from TVG-Zimsen, specially equipped for transporting them to harbor in Landeyjahöfn. 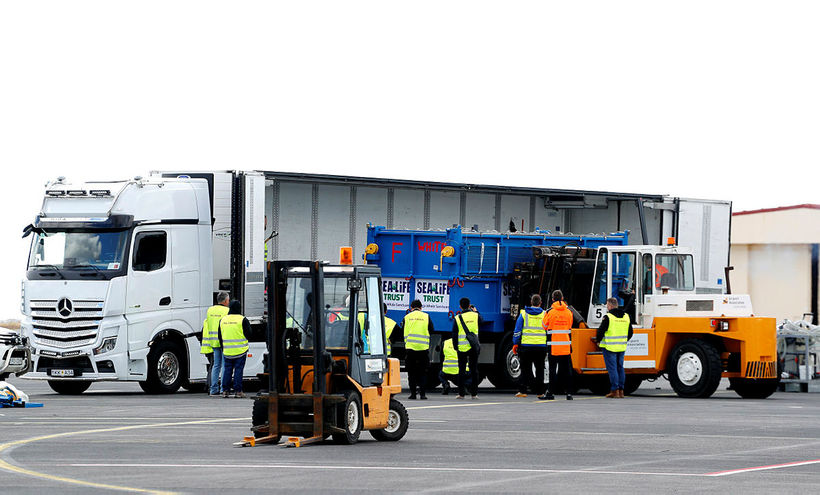 Passengers onboard the ferry Herjólfur waited patiently past the scheduled departure time in Landeyjahöfn harbor for the late arrivals, mbl.is reports. 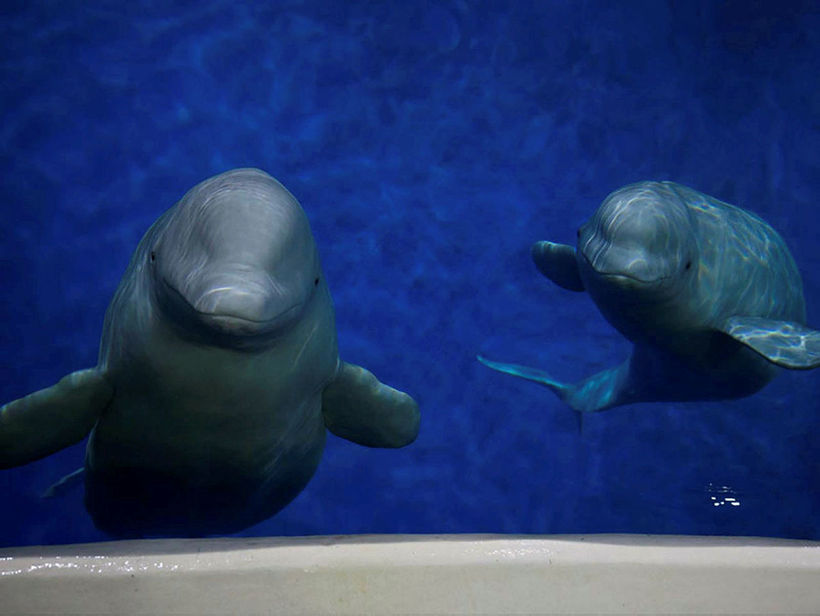 After midnight, the sisters were released into a pool in Vestmannaeyjar islands, where they will stay to begin with. They started swimming around and eating shortly after arriving there.

The belugas will hopefully keep moving around for decades to come. Belugas can get up to 40 or 50 years old.