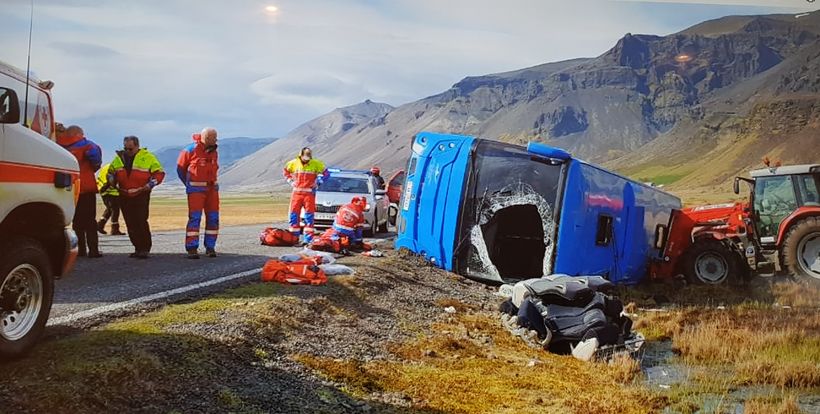 From the scene of the accident. Photo/Contributed

A bus accident in South Iceland yesterday left four people seriously injured. A bus, carrying 33 people, all of them Chinese citizens, according to Morgunblaðið , went off the road shortly after 3 pm and landed on its side. The accident occurred on Ring Road 1, midway between Kirkjubæjarklaustur and Höfn, just east of the farm Hof in Öræfi.

Rescue workers arrived quickly to the scene. Two of the passengers landed under the bus. Two farmers from nearby farms brought their tractors to the scene and managed to lift the bus off the people to release them. That operation took half an hour. The Icelandic Coast Guard helicopter transported those two passengers and another two, all of them seriously injured to Landspítali National University Hospital in Reykjavík.

The operations control of the Department of Civil Protection and Emergency Management was activated in Selfoss, as soon as the accident was reported. By 6:30 pm, the less serious passenger injuries had been evaluated at Litla-Hof, a nearby farm, to determine how the injured would be transported to hospital.

Weather was good at the time of the accident, so the cause was unclear. Grímur Hergeirsson, acting chief of police at Selfoss, reports that among the things being investigated is whether wind gusts, common in this area, could have been a factor.

The South Iceland Police Department is investigating the accident. 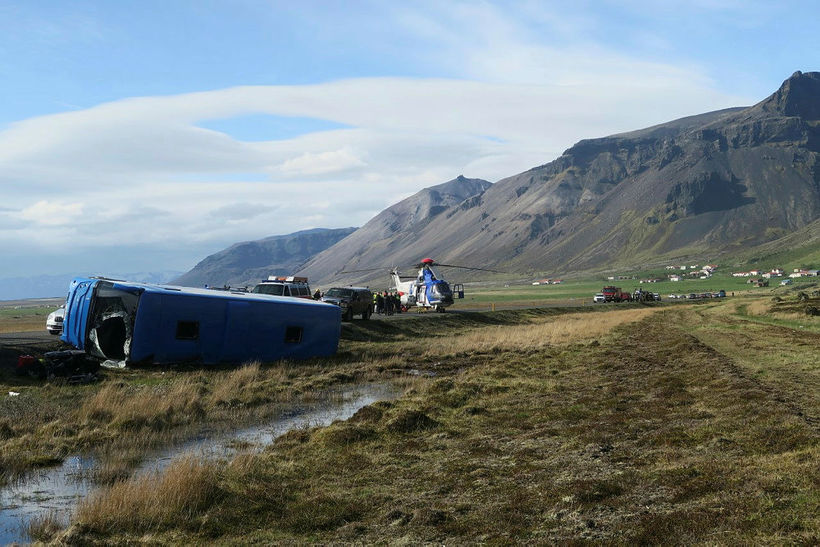 Rescue workers and helicopter at the scene of the accident. Photo: Sigurður Gunnarsson

There were 32 passengers on the bus, all of them Chinese tourists, but the bus company is Icelandic. The bus driver resides in Iceland and is experienced in driving in Iceland. He escaped without injury. According to mbl.is , he told police that two large vehicles, coming from the opposite direction, passed the bus right before the accident. Sveinn Kristján Rúnarsson, chief constable at Hvolsvöllur, tells mbl.is it is not clear whether that played a role in the accident. He notes that the road in this area is narrow.

Some of the injured were transported to the Health Care Institution of South Iceland in Selfoss. Many of the passengers escaped with scratches, and they stayed in Hella, South Iceland, overnight. Sveinn reports that communicating with the passengers was not a problem, since many of them speak English, in addition to the tour guide. “If need be, we will get the assistance of an interpreter,” Sveinn remarks.

Only four of the ten people transported to Akureyri yesterday required hospitalization. They are not seriously injured.