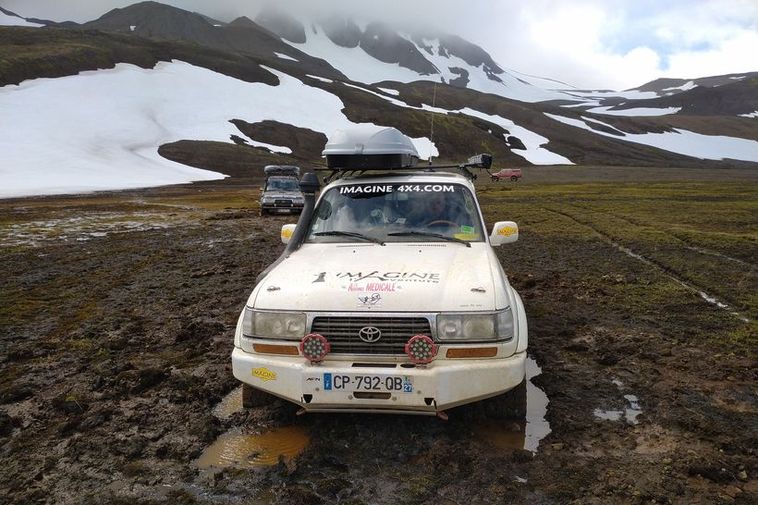 The French couple who drove two 4x4s off road near Kerlingarfjöll mountains in the Icelandic highlands on Sunday, were fined a total of ISK 400,000 (USD 3,750, EUR 3,200). Off-road driving is illegal in Iceland. The couple paid their fine, sought assistance from the French embassy and issued a statement, saying they were sorry for the incident.

They claim a sign prohibiting motorized traffic in the area was not well enough located to be visible to them.  The sign, they claim, was moved to the middle of the road by a worker in the area. They further resent the verbal abuse they have received from people in Iceland since the incident.

“We were told by police that it has been unseasonably cold this year and that the thaw came late. Otherwise the trail would have been passable. Why weren’t there rocks placed at the end of the road, as we have seen elsewhere in the country?” they ask in the statement. In order to avoid a snow bank in the middle of the road, they drove off the road and got their vehicles stuck.

In the statement, they plead to the nation to let them continue their trip quietly, without further abuse, and they sincerely apologize for the incident.

The French travel agency, Imagine 4x4, the logo of which is on the two vehicles in question, has received numerous emails from angry Icelanders since the incident. The travel agency, however, reportedly has nothing to do with the couple’s trip to Iceland, for the tourists got the stickers from the company many years ago, following their trip to Africa.

The marks left by the two vehicles in the moss-grown landscape are expected to take many decades to heal, according to officials in the Kerlingarfjöll region.