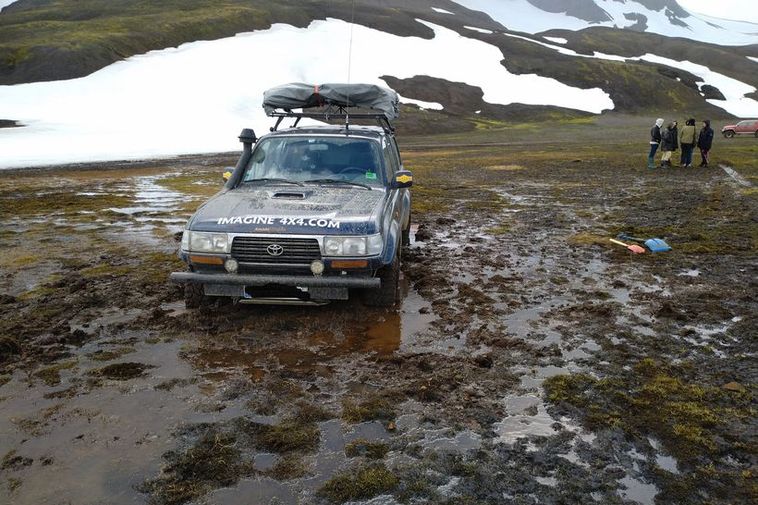 The vehicles were driven off the road to avoid snow banks. Photo: Páll Gíslason

The South Iceland Police Department received notice yesterday of two 4x4s, which had gotten stuck off road in the Icelandic highlands, near Loðmundur mountain, north of Kerlingarfjöll mountains. Off-road driving is illegal in Iceland, and mountain roads in the region are still closed, due to an unseasonable amount of precipitation. The roads are simply to muddy to pass.

Páll Gíslason, CEO of the Kerlingarfjöll Highland Center, was contancted by the tourists, who asked him for assistance after getting their vehicles stuck. He refused the request and immediately contacted police, who are now handling the case. Driving is entirely prohibited in the area. According to Páll, the drivers drove off the road to avoid snow banks and then got themselves stuck in a moss-covered area. “This is a terrible treatment of [the moss],” he told mbl.is. “The area near Loðmundur mountain is all moss-covered. The moss is very delicate. ”

According to the South Iceland Police, it is not yet clear what kind of punishment the tourists will face. Each case, they say, is evaluated independently. The vehicles have foreign license plates and are marked with the logo of the French travel agency Imagine 4x4, which  organizes and promotes adventure 4x4 tours worldwide.

Páll praised the Icelandic travel club 4x4 for its cooperation in keeping the are closed to motorized traffic, but admitted frequently receiving phone calls from Icelandic drivers, eager to drive in the area.

He concluded, “If we intend to protect this country’s nature, it includes fighting this off-road driving. Some tire tracks don’t disappear.”