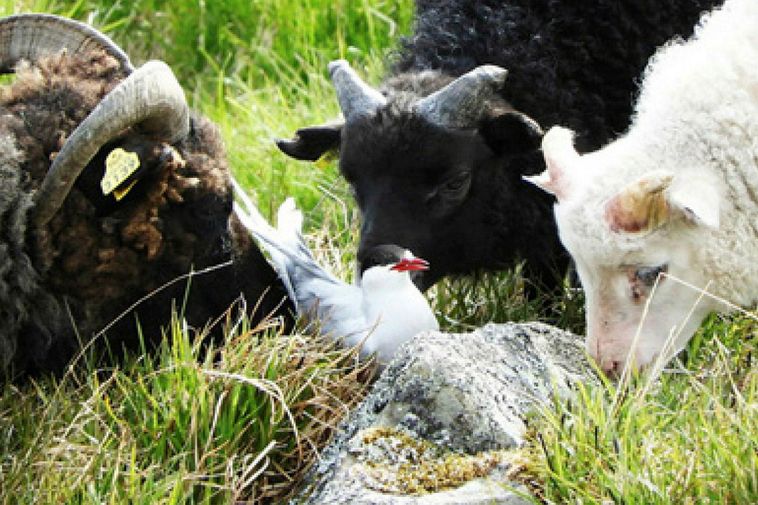 A newly published article in the nature journal Náttúrufræðingurinn reveals that in 2019, sheep on Flatey island in Breiðafjörður fjord, West Iceland, were seen pushing an Arctic tern off its nest and eating its eggs, Morgunblaðið reports.

Arctic tern breeding grounds were monitored for ten days where sheep grazed as well. The article states that only a few instances of sheep feeding on chicks or eggs have been recorded  in Iceland, but one can assume it to be more common than the data suggest. Such predatory behavior by sheep is known abroad as well.

The reason for this behavior is unknown but may possibly be related to mineral deficiency in the sheep, the authors state in their abstract.

In the article, the authors — Ævar Petersen, Sverrir Thorstensen, Scott Petrek and Kane Brides — describe the incident mentioned above:

“In the summer of 2019, we witnessed a ewe and its two lambs surround an Arctic tern, which was sitting on its eggs. The bird sat still until one of the lambs nudged it, driving it off the nest from which it flew. Subsequently, the sheep ate the eggs. Meanwhile, the bird kept attacking them, as Arctic terns do, but the sheep were not deterred.”

“The  effects  of  sheep  or  other  livestock on wild birds is still poorly studied  in  Iceland,  but  these  can  be  both negative and positive for the birds,” the authors conclude.