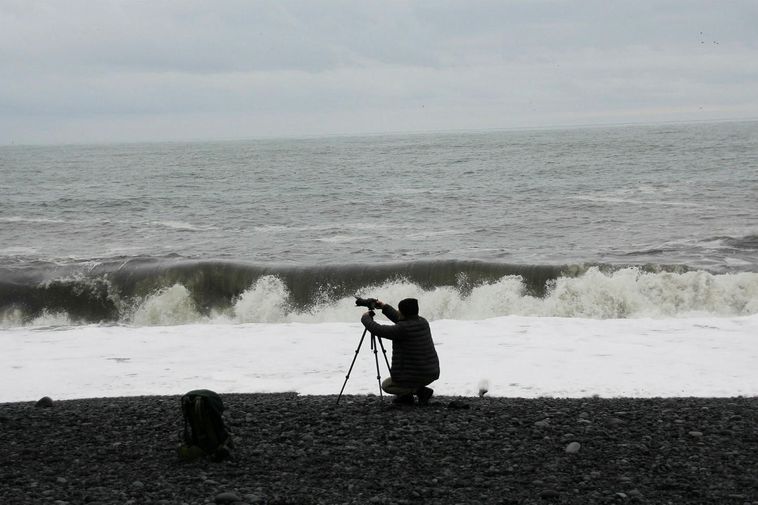 On Saturday, a photographer on Reynisfjara beach, South Iceland, made a narrow escape from a huge wave that hit the spot where he was standing, Morgunblaðið reports. The man had put up a tripod close to the shore, ready to take pictures.

Suddenly, a huge wave approached, sending the man running for his life. He escaped unharmed, but it was a close call.

“It was sheer luck that this didn’t have a bad ending,” states Ólafur Óskar Jónsson, who witnessed and photographed the incident.

“His behavior really got me thinking. In my view, this is reckless endangerment, because there are very clear signs in the area that shouldn’t escape anyone’s attention.”

Reynisfjara beach has in the past decade become one of Iceland’s most popular tourist destinations. Numerous times, though, people’s lives have been in danger when they venture too close to the shore. The danger lies in so-called sneaker waves – very large waves that approach the shore suddenly and unexpectedly.

Three tourists have lost their lives on Reynisfjara and the adjacent Kirkjufjara beach when caught by sneaker waves. The first fatal accident occurred in 2007, when an elderly American woman was caught by a wave. The second accident claimed the life of a Chinese man in February of 2016, and the third one occurred on Kirkjufjara beach in January of 2017, when a German woman lost her life.

“Sometimes, people have exposed themselves to life-threatening conditions there. Still, there are clear signs on the beach, which many people seem to ignore, for whatever reason.”