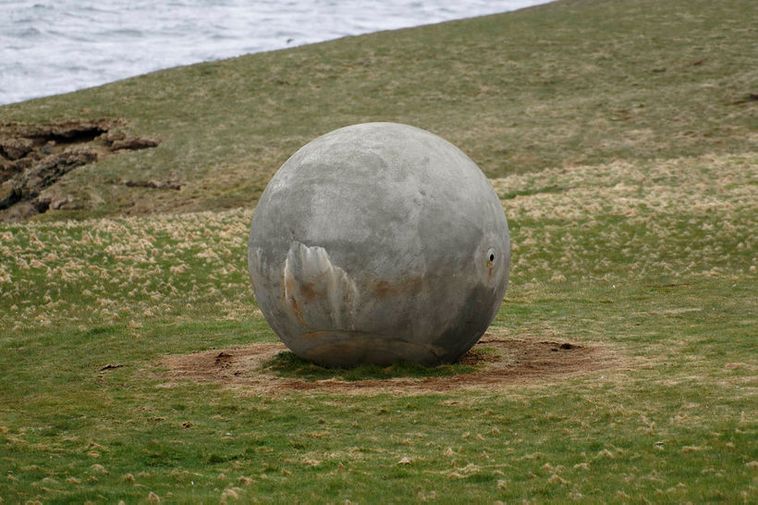 “Orbis et Globus,” meaning Circle and Sphere, an eight-ton concrete sphere, marking the Arctic Circle on the northern tip of Grímsey island, off the north coast of Iceland, is under heavy criticism from some of the islanders for its location, Morgunblaðið reports.

The sculpture, made by Kristinn E. Hrafnsson and Studio Grandi, was the winning entry in a contest for a new landmark for the the Arctic Circle. It has been on the island since 2017 and was designed to be moved incrementally every year, following the movement of the imaginary line, the Arctic Circle, which  marks the southern extremity of the polar day (24-hour sunlit day) of the summer solstice in June and the polar night (24-hour sunless night) of the winter solstice in December. The Arctic Circle is currently moving north from Iceland at a rate of about 14-15 m (46-49 ft) a year.

The problem was discussed at a town meeting on the island on Monday. What annoys residents is that tourists feel deceived not seeing the sculpture, of which they have heard prior to their visit, during a short stop on the island. Walking all the way up to it, at the island’s northern tip, and back to the harbor takes a total of three hours – too long during a two-hour stop.

“A sign marking the Arctic Circle used to be located at the airport,” states Guðrún Inga Hannesdóttir, a member of the neighborhood council, “and everyone was delighted to cross it right there.”

But times have changed, bringing people information about the exact location of landmarks – even the Arctic Circle.

Guðrún, who is quoted by Morgunblaðið as saying, “We wished it had never arrived,” referring to the sphere, will have to wait a while before it rolls off the island. It is, as it turns out, on its way off, albeit at a slow pace. The Arctic Circle is not expected to leave the island until 2047. This was confirmed by María Helena Tryggvadóttir, project manager for Akureyrarstofa, the Akureyri office for culture, marketing and tourism. You may want to plan your visit by then.

“The Arctic Circle is not constant. It moves. That was the idea behind the sculpture … to make it show the nature of a natural phenomenon,” María explains. She is aware of complaints by the islanders, who feel that tourists are spending less time in town than before.

Because the walk to the sculpture is longer than visitors expected, the town of Akureyri is now recommending to tourists that they spend a night on Grímsey island. She adds that in modern society, tourists wouldn’t accept inexact information about the location of the Arctic Circle: “Nowadays, everyone has a smartphone with GPS. Some walk by themselves, phone in hand, and find the Arctic Circle’s exact location.”