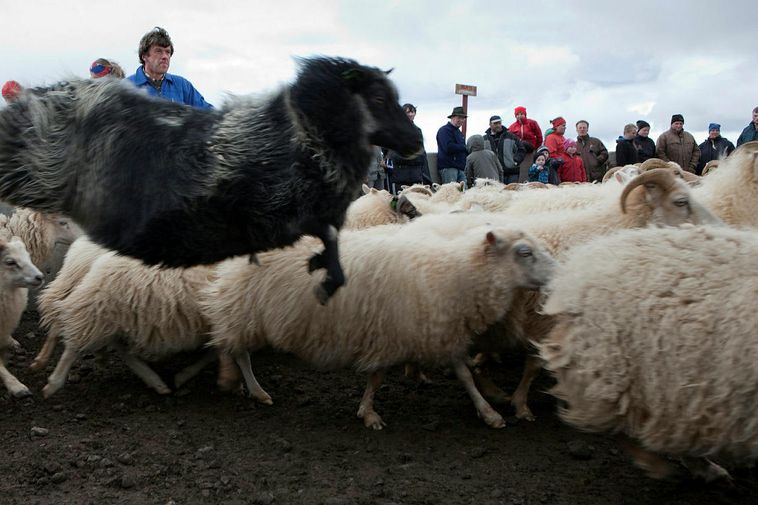 Time flies, as does the sheep in the picture above (click on the picture to get a better view), and the season’s first roundup of sheep is coming up Friday – a sure sign that summer is over.

The sheep are currently being herded from the mountains, and as we reported Friday, all disease prevention rules must be carefully followed. Therefore, fewer people than usual take part in herding the sheep, and only farmers and farm workers may attend the roundup this year.

The weather gods are definitely not planning to be cooperative this weekend, judging from the weather forecast. A yellow alert is in effect for all but the westernmost part of the country from Thursday afternoon till midnight, Friday. A severe gale is forecast with heavy precipitation – in the form of sleet or snow, that is, blizzard conditions, at higher elevations - in the highlands, as well as in the northern and northeastern part of the country, including the eastern coastal areas. In the East Fjords and southeast, a severe gale and strong wind gusts are predicted.

“We’ve never encountered such unfortunate conditions,” Rafn Benediktsson, farmer at Staðarbakki, Miðfjörður, Northwest Iceland, tells Morgunblaðið, referring to the COVID-19 situation. He is one of the people organizing the roundup in his area.

This year, only nine people take part in herding the sheep in Miðfjörður instead of 21. The numbers are limited, since fewer people than usual are allowed to share mountain huts, due to social distancing rules.

Roundups will take place at several locations in the country on Friday and over the weekend.

No more than 100 people may gather at once, which means that the herds of sheep will be brought to the roundup in Miðfjörður at different times. Those who attend the roundup must have a ticket to enter.

While Rafn would like some of the disease prevention rules to be eased to make the roundup easier to plan, he knows that dealing with the weather gods is a different matter. “There’s  no point in applying for an exemption from the [bad] weather.” He can only hope that luck will be on his side.