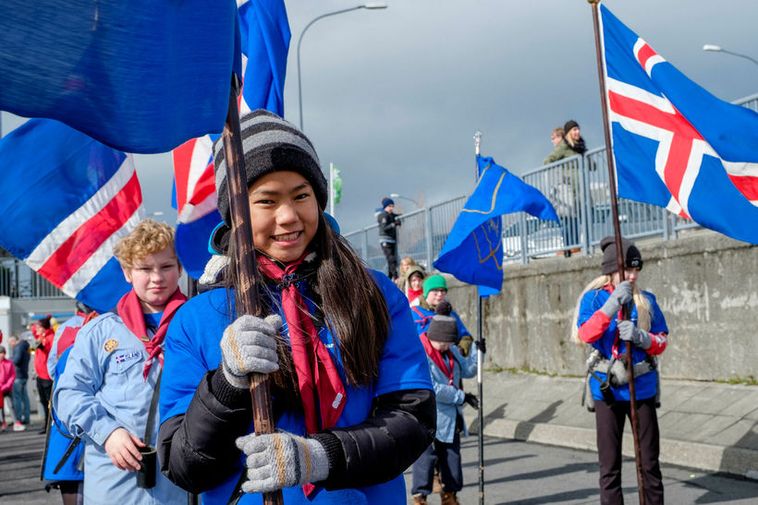 Today is the First Day of Summer in Iceland, a public holiday, celebrated with parades and outdoor entertainment.

The day always falls on a Thursday, somewhere between April  19 and 25. Old records show that this day has long been celebrated in the country. Saga Daganna (meaning The Days’ History), a book by Árni Björnsson, provides interesting details on this day’s history:

As far back as the 16th century, it was a custom for Icelanders to exchange summer gifts, making them a much older tradition than Christmas gifts. Only the most urgent work was done on this day in the Icelandic countryside, such as milking the cows, feeding the farm animals and cooking. Besides, this was traditionally a day for children’s games.

Late in the 19th century, public gatherings on this day became the norm. Since 1900, the celebrations have focused on young adults and children.

An old folk belief holds that it is an indicator of a good summer if winter and summer freeze together. To check this out, on the Last Day of Winter people would take a container of some sort outside, in which they put water, place it in a shadow and find out in the morning whether it had frozen.

There were other ways used for predicting what the summer would be like. Those included dreams, the arrival of migratory birds, the behavior of insects, worms, farm animals and vegetation. Among the birds, the arrival of the golden plover and the whimbrel was the best indicator, followed by that of the common snipe, the thrush, the raven and the white wagtail.

The First Day of Summer never meant that people expected warm summer weather to have arrived. It only signaled the beginning of the summer semester, following that of winter.

Around 1900, the First Day of Summer was in most parts of the country believed to come closest to Christmas and New Year’s Day in terms of the extent of the celebration. It was celebrated by serving smoked lamb and various other traditional meat dishes, as well as baked goods. People would also wear their best clothes.

The cows were frequently let out on this day, weather permitting, to give them a taste of summer.

Finally, it is worth noting that the First Day of Summer is one of Iceland’s 11 official flag days.