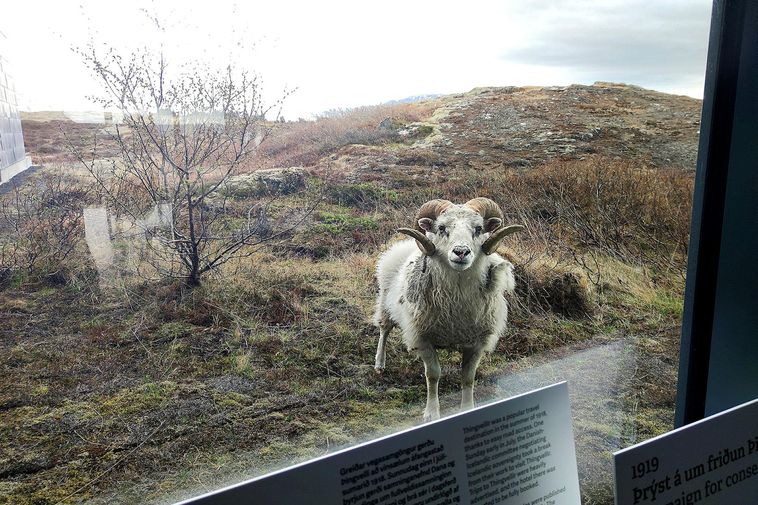 When Einar Á. Sæmundsen, director of Þingvellir National Park, came to work last week, he was startled to see the signs of an attempted burglary, Morgunblaðið reports. Upon closer examination, the case appeared most peculiar.

“The window pane of the door was broken, and the door handle – strong and made of steel - was all bent.” Besides, nothing had been stolen from the building.

Shortly thereafter, as Einar was standing in the entry of the Visitor Center, along with a staff member, the burglar returned - in the shape of a ram.

“Three [employees] went outside to chase the ram away,” Einar states. “It responded by trying to attack them.” In the end, the ram turned around, saw its reflection in the window and went berserk. Three times, it charged at its own reflection, breaking the window pane into pieces and damaging another one.

The burglar then took off and was found a few days later, along with a younger ram. “The younger one, though, bore no responsibility for the vandalism or attempted burglary,” Einar states, “but must have learned a thing or two from the older one in recent days.”

Investigation revealed that neither of the rams was earmarked, and, thus, had no owner. Both had been born and raised in the national park. Despite attempts every year to clear the park of sheep, some manage to hide in bushes and stay behind. Besides, maintenance of the park’s fences has lately been on the back burner. Only when the grass in the camping area turns green do the sheep come out of the bushes to feast on it.