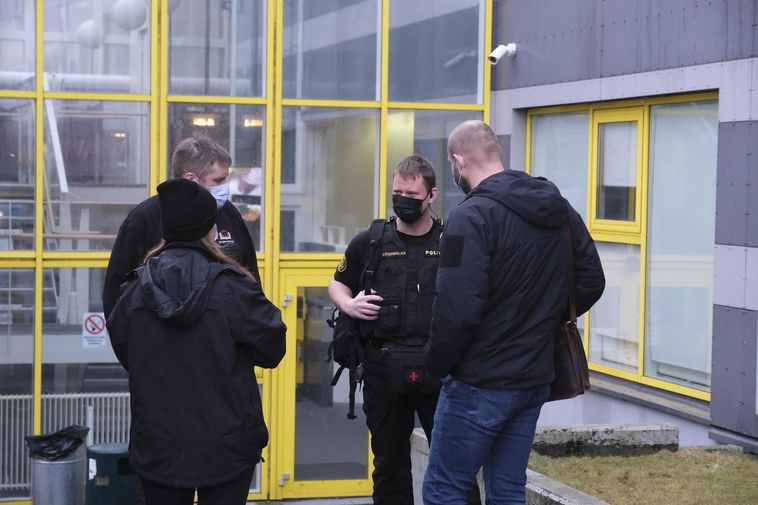 One teenager was remanded in custody yesterday afternoon, following an attack on students in Borgarholtsskóli secondary school, Reykjavík, which left six people injured. (See our report from yesterday here). He will be in police custody until January 21, in interest of the investigation, mbl.is reports. Students were attacked inside the school with knives and a baseball bat shortly before 1 pm yesterday.

Two other teenagers arrested following the incident have been released, since the Reykjavík District Court did not grant the request of the capital area police that they be remanded in custody.

None of the people injured in the attack suffered life-threatening injuries, according to Superintendent Margeir Sveinsson, and all of them have been discharged from the hospital.

Ársæll Guðmundsson, principal of Borgarholtsskóli, highly praises his staff. “I believe they saved a great deal,” he states. “They risked their lives…In my view, they miraculously managed to defend the school’s students and their school.”

The mother of one of the students issued a statement on Facebook yesterday, explaining that the attack was aimed at her son. Several months ago, she states, her son prevented this group of teenagers from attacking a girl, after which he received threats from them. He and his older brother were both injured yesterday.

Minister of Education Lilja Alfreðsdóttir will be meeting with the school’s principal today, specifically to discuss security. “I condemn all violence,” she tells Morgunblaðið. She states she believes students and staff reacted in exactly the right way to the serious situation.

“I emphasize that we live in a free and very good society, and we want to maintain that type of society,” Lilja states.

A plan involving how to react to potential threats in Icelandic secondary schools, including natural disasters such as earthquakes, as well as the threat of violence, is being prepared by the Association of Icelandic Principals. It is expected to be completed during this school year.