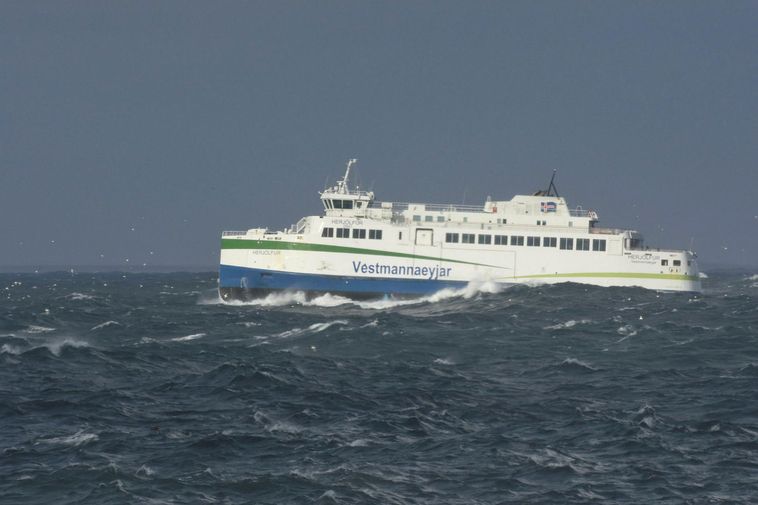 The ferry was taken into use in July last year and used electricity as well as fuel to begin with. Since then, electrical towers have been built in Vestmannaeyjar Harbor and Landeyjahöfn harbor, with arms extending to the vessel, vastly increasing the reliance on electricity.

The price of electricity is only a fraction of the price of fuel, states Guðbjartur Ellert Jónsson, managing director of Herjólfur ohf., although he won’t reveal precise figures. The cost, he states, varies depending on the season and the weather.

Under favorable conditions, the ship can run on electricity alone. The weekly use of electricity is roughly 100,000 kWh and the use of fuel anywhere from none to 2,500 liters. Without electricity, the vessel would require 35,000 liters of fuel a week. By comparison, the old ferry Herjólfur III it replaced used 50,000 liters a week.

The new ferry can sail in shallower waters than the old one, making it easier for it to sail to Landeyjahöfn harbor than was for its predecessor. The ferry ride to Landeyjahöfn, located about 80 km (50 mi) east of Þorlákshöfn, is only half an hour, compared to a three-hour ride from Þorlákshöfn harbor.

The picture is not as favorable when the ferry must sail to Þorlákshöfn harbor, due to high waves in Landeyjahöfn harbor. Then, the vessel can only run on electricity the first half hour and must rely on fuel for the rest of the trip, as well as for the entire return trip.

By never using more than 40-80 percent of the batteries’ capacity, Hjörtur expects their life can be extended considerably.

In addition to saving fuel costs, the advantages of running the new ferry on electricity include a smaller carbon footprint from the operation, reduced maintenance costs, and a more comfortable ride for the passengers.

Hjörtur tells Morgunblaðið that all ferries built for the Nordic countries nowadays include batteries, which can be used for shorter rides, while longer ones require fuel as well.

You can see pictures from the ferry’s first ride here.