Successful Rescue of Man Stuck in Mud for Hours: Video 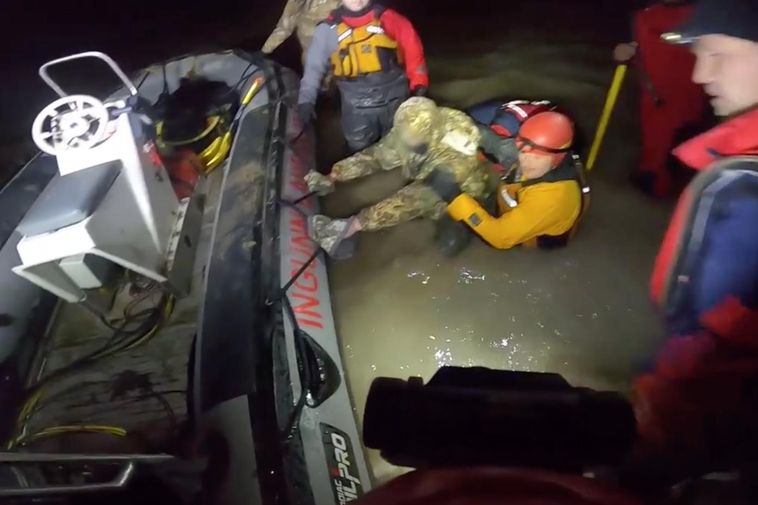 The Icelandic Coast Guard released a video last night of the rescue of a man who was stuck for more than three hours in sand, or mud, in Sandvatn lake, south of Langjökull glacier, Wednesday night.

The video shows rescue workers, facing difficult conditions, gradually manage to pull the man out of the mud.

The man, who wants to remain anonymous, had been hunting in the area. Contrary to first reports, he was traveling with another man. When rescue workers arrived, he was standing in the lake, his right foot completely stuck in the mud, which was so thick that pulling him out of there was no easy task.

Rescue workers were able to dig with their hands and eventually get the blade of a shovel under his foot. The man was able to lean against an inflatable boat while the rescue team was at work. You can watch as they finally manage to release him.

The man was transported by helicopter to hospital.

“An incidence such as this one is a reminder that no matter how well equipped you are, danger can loom anywhere,” the man writes. “Luckily, I was not traveling alone, and our phones were fully charged, and we were lucky to have phone service in this area. It is a terrible feeling to be stuck in water and totally helpless.”

“What good fortune and privilege to have such strong rescue teams and first responders, who did such a magnificent job…I send them, as well as the medical staff at Landspítali, my warmest thanks,” he states.

Pilot Whale Could not Be Saved