It is rare for ewes to give birth to three lambs, and four are surely the exception.

No wonder, then, that farmer Bjarni Grímsson at Skeggjastaðir, Mosfellsdalur valley, Southwest Iceland, was surprised to see the head of the fourth lamb emerging from the womb of the ewe Crazy Bína (Brjálaða Bína).

“I certainly wasn’t expecting this,” he tells mbl.is. Still, Crazy Bína’s father, Vestri – originally from the West Fjords - is the descendant of sheep that are famous for fertility.

Five-year-old Crazy Bína can be crabby at times, Bjarni states. At an early age, she knocked him down during a roundup, which is why she earned this name.

In the video above, you can watch the ewe with her week-old quadruplets – one female and three males. They are all doing well, although one of the lambs is weaker than the rest and requires a bottle and vitamins.

Bjarni states it is very hard for a ewe to take care of quadruplets over the summer. Therefore, he may try to find an adoptive mother for one of the lambs. 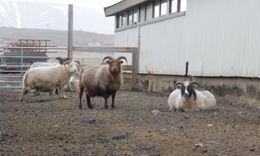