‘The Ground Appeared to Be Spinning’ 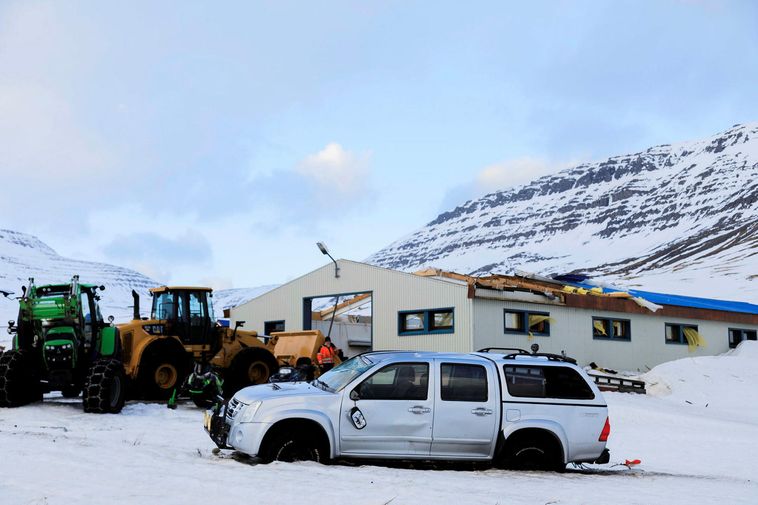 “The ground appeared to be spinning,” states Sigurgeir G. Jóhannsson, farmer and contractor at Minni-Hlíð, Bolungarvík, in the West Fjords of Iceland.

Half the roof of his machinery shed blew off in severe weather yesterday morning; windowpanes shattered and siding was lost.

“Numerous windowpanes broke, and the wind blew such a great amount of stones toward the house and the nearby cabin, that the windowpanes were covered in what resembled bullet holes,” Sigurgeir relates.

“The siding of the shed is almost completely ruined. It looks like someone shot at the walls.” A pickup truck, owned by the Radar Agency, went airborne as well.

“I was on my way from one building to another when this enormous wind gust hit,” Sigurgeir describes. “I threw myself on the ground, and that’s when the wind took the pickup truck. It rolled over a few times and landed in a snowbank. Then it went airborne and landed on the wheels a few meters farther down the hill.”

“I managed to stick my hands into the snow,” he continues, “and the vortex was so strong that the ground appeared to be spinning underneath me, instead of me spinning. I released my grip on the snowbank and barely made it to the sheepshed. This weather was terrible.”

This is the worst weather Sigurgeir remembers. The wind blew stones into his face and rocks were scattered all over the field near the farmhouse.

By 8 am yesterday, the wind speed at the weather station in Bolungarvík measured 18 m/sec, with wind gusts of 44 m/sec.

Guðmundur Ragnarsson, master of the radar station on Bolafjall mountain, went up the mountain Wednesday night by snowmobile, after parking the truck by the farm. He states that the average wind speed on the mountain was 40 m/sec, while the strongest wind gust measured 60 m/sec.