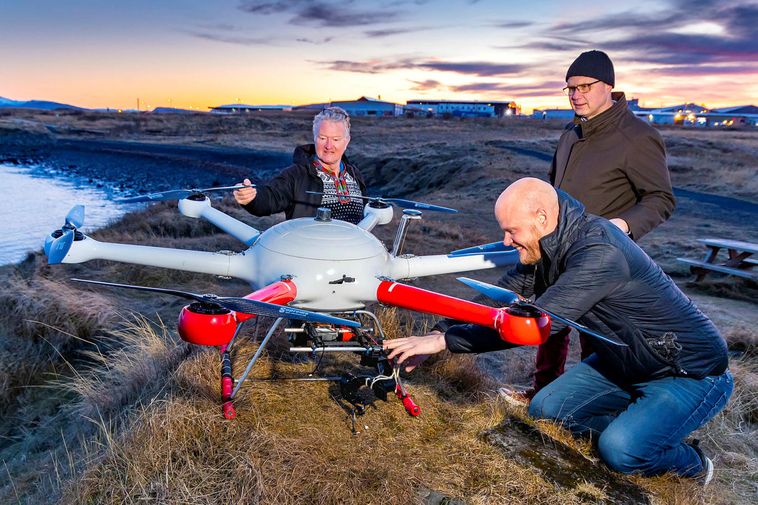 The prototype of a large drone, designed and made in Iceland, intended for herding reindeer in Greenland, is ready to fly, Morgunblaðið reports. Behind the project, which has been underway for 18 months, are Stefán Hrafn Magnússon, reindeer farmer in Isortoq, Greenland, Jón H. Arnarson, engineer and specialist in unmanned aircraft, and CEO Ingvar Garðarsson.

“I used to have a very expensive  helicopter operation for herding the animals,” he states. Traditional, factory-built drones, such as Icelandic farmers have used for herding sheep, don’t work well for herding reindeer in Greenland, he explains, since their range is inadequate for the long distances in Greenland. Cold temperatures, furthermore, affect how long the batteries last and reduce the range.

The drone is 2.46 m (9 ft) in diameter and equipped with six electrically powered motors. The rotors run on two small batteries. A gasoline-powered motor generator keeps charging the batteries.

The drone is remote-controlled from land and can be programmed to follow previously determined routes.

Testing of the drone in August showed that reindeer react to it in a similar way as they do toward a helicopter. “You could call the drone a highly developed herding dog,” Stefán remarks.  A fast one it is, for on a full tank, it flies at speeds of up to 18 km/hour (11 mph), but when lighter, it can reach a speed of up to 50 km/hour (31 mph).