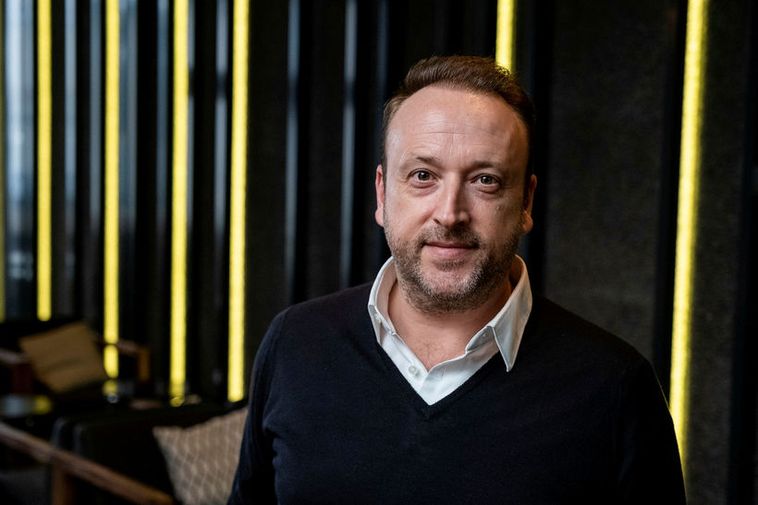 Holyoake says he has gradually become a great fan of Iceland and that he has acquired a number of friends and acquaintances here. mbl.is/Kristinn Magnússon
Skúli Halldórsson
sh@mbl.is

British investor Mark Holyoake stepped down from the board of Iceland Seafood International earlier this month. He acquired a controlling stake in the company in 2010 and has been involved in its development and acquisition of foreign fisheries companies ever since.

He says that the timing is right to withdraw from the board, despite the fact that he will continue to hold a large share in ISI.

"I think that at the beginning of this investment, I hadn't thought about sitting on the board for more than a decade. In light of the positive changes that have taken place in the company over the past few months, I felt it was the right time to step aside and let others step in," Holyoake says.

The market was different in 2010

"We have a great group, as Bjarni Ármannsson is taking over the position of CEO and new board members are also coming in. You see that the group is full of energy and wants to drive the business up and to greater heights."

Since Holyoake invested in ISI in 2010, the company has grown tenfold.

"This really is an exceptional growth. We have enjoyed having a really strong core, led by Helgi Anton Eiríksson as CEO, and Benedikt Sveinsson as chairman of the board, who has worked in the sector for over forty years," he says, also pointing out that the market conditions were completely different in 2010.

"The banking system had relatively recently collapsed and the banks were still working to rebuild themselves. The country's economy was unstable, but we looked at the strengths of the company and decided to go for it. Since then, ISI has acquired a number of other companies and has moved closer to the role of adding value to its products, through investment in operations, and beyond the role of merely purchasing and selling products. Thus, ISI has been steadily increasing its profitability."

Holyoake notes that no one has been sitting idly by. "These have been very busy years."

Important to control the product from its source

Asked about the greatest challenges facing the company at this juncture, he says ISI is in a very good position now, which allows him to step down from the board.

"Almost a quarter of the country's fish producers are shareholders and the company possesses incredibly strong marketing and production capabilities, which means that the product can be taken within the company all the way from the beginning to the end of the value chain. I think in this industry right now, if you can't take advantage of this vertical integration, you will find it really hard to make good long-term profits," he says.

"The most important thing is to be able to control the product from its source and until it arrives on the consumer's plate. That's why we focused on how to increase the value of the product and investing in companies in the countries where the consumers of the product live," he adds, mentioning Britain and Spain as an example.

"The emphasis on this, as well as getting owners of the fishing quotas into the shareholder base, means that ISI is in a really strong position versus its competitors."

A long history of success

Good is the guest‘s eye, goes the Icelandic saying, and Holyoake's position has undoubtedly given him a good insight into the fishing industry in Iceland, with reference to other countries. Thus it suits well to ask him whether Iceland has anything unique to offer in this comparison. He is quick to answer:

"What it also comes down to is the experience and knowledge that has been preserved between generations. Iceland has a long history of success in the fisheries sector, and Icelanders can be proud of that."

He says he believes that in the coming years there will be even more consolidation within the sector in Iceland.

"The fisheries sector is still somewhat fragmented, and I think the companies will have to consolidate more. One of the main reasons for the changes we faced with ISI at the time was that we wanted to reach a size that enabled us to compete with companies on a global scale. Subsequently, we have seen two or three companies here in Iceland who are thinking the same way and looking at our success."

A strong core of people within the company

Holyoake has worked for more than two decades in the fisheries industry, but he first entered the sector in 1996, focusing on the production of seafood in Asia.

"ISI first entered my radar in 2008 and 2009. Of course, there was a certain turmoil in the economy. For me, the company seemed to play a very important role, but at the same time was faced with some adversity. It had grown beyond capacity to some extent, but we watched this investment opportunity well and for a long time and found that within the company, there was a strong core of people, which is still the case today. As soon as we realized it, we thought we could contribute to improving the business and moving it forward."

However, he admits that it was difficult to make a decision to invest in ISI at this time. "This is an indication - if you had told people ten years ago where Iceland was today, I think they would be very happy and relieved. Those times really were something else, and the Icelandic economy, as it was, was upset. This investment was accompanied by a considerable risk, but it turned out to be right when looking back.

These nine years have been great for us. The company achieves its goals time and time again, it has grown in the right direction and 80% of the profits now come from the value increase of the raw material, instead of buying and selling, but when I first looked at the company's figures, it was roughly the opposite."

Asked how the Icelandic fisheries sector meets his eye today, as a platform for investment opportunities, Holyoake starts by mentioning that over this nine-year period he has gradually become a great fan of Iceland and that he has acquired a number of friends and acquaintances here.

"In this way, I have really become an advert for Iceland, its benefits and quality. But as far as opportunities for investment are concerned, some aspects can still be improved. The currency's volatility - and it is volatile - is something that scares investors. However, bureaucracy related to capital movements has diminished significantly and today Iceland should be able to offer good investments, if that is what people want,” he says.

"It is in some ways ironic that now ten years later I feel my country, the United Kingdom, is heading towards this crisis, though perhaps the situation will still be better than what Iceland endured during the banking crisis. If Brexit becomes a reality, it will probably cause considerable damage to the economy, but at the same time perhaps create unique investment opportunities. "

The inevitable question follows: Do you think Britain's departure from the European Union will be realized? "I don't know anymore. And the sad thing is, I don't think anyone knows."