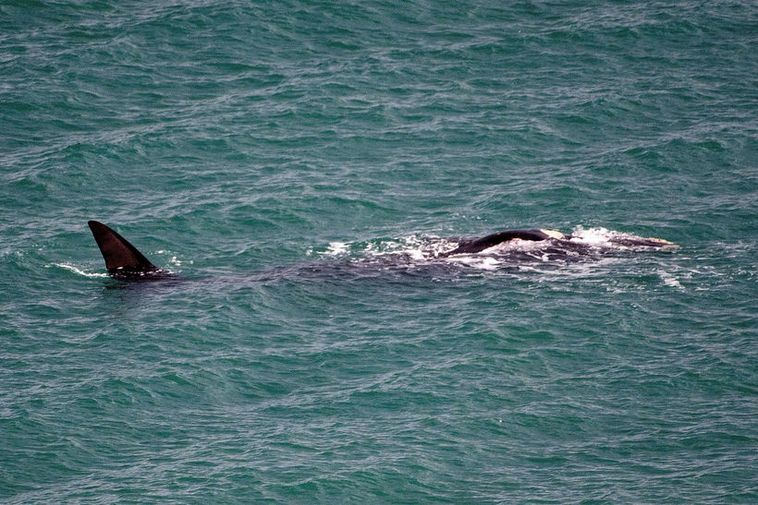 A North Atlantic right whale was spotted by whale watchers onboard a boat from Elding Whale Watching on Monday. On the company’s website, photos of the whale were posted yesterday, along with information about this rare, protected species.

The whale has since been identified by experts. “We now know which right whale was spotted off Reykjanes peninsula and near Reykjavík [Monday morning],” Gísli Víkingsson, a whale expert at the Icelandic Marine and Freshwater Research Institute, told Morgunblaðið.  “My colleagues in the US recognized it from a picture as a ten-year-old male, on his first trip to Iceland, but who has previously always traveled to Canada in the summer.” Gísli reports that the whale comes all the way from the waters of Massachusetts in the US.

The skipper, Guðmundur Falk, who spotted the whale, describes it this way: “I had brought tourists out by Hrafnkelsstaðir when I spotted the whale, and I had no idea what species it was. I had no time to take a picture, but notified others right away and told them where I thought it would swim.”

His calculations were right, and about 2 pm the same day, Guðlaugur Ottesen Karlsson, who also is a skipper for Elding, caught a picture of it just off Akranes. The whale was spotted again in Faxaflói bay and appeared to be healthy.

North Atlantic right whales are an endangered species, protected since the 1930s, and rarely seen elsewhere than off the east coast of North America. Despite being protected, they are the rarest of all whales, counting only 300-500 animals.

The whale derived its name from being regarded by whalers as the “right” whale to kill on a hunt. It was an easy prey, for it swims slowly and, moreover, it was easy to transport to port after being killed, since its thick blubber made it float.