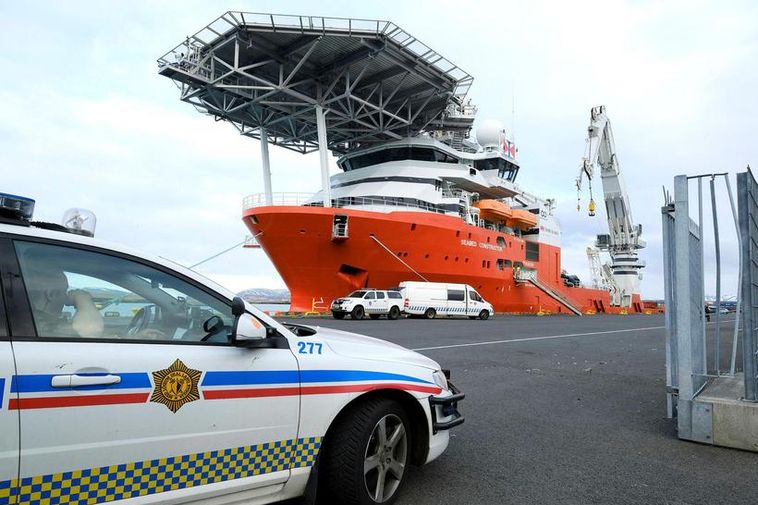 The police was waiting for the ship when it docked in Reykjavik. Photo: Iceland Monitor/Golli / Kjartan Þorbjörnsson

Last Saturday the Icelandic Coast Guard directed a Norwegian research ship to dock at a Reykjavik pier after the crew gave to Coast Guard vague and different explanations for their reason to be in Icelandic waters.

The ship, which is called Sea­bed Constructor, had been stationary for some time, which caught the attention of the Coast Guard. The ship is rented to a UK based company called Advanced Marine Services.

“The first answers we got were that they were looking at an “interesting target” from the WW II, but couldn’t explain it any further. Then we got some misleading information that they were researching but couldn’t at that moment due to weather,” says Georg Lárusson, director of the Icelandic Coast Guard.

He adds that the Coast Guard received information from the company’s lawyer that the crew was looking for the wreck of German cargo ship Minden. Minden's crew sunk it themselves to keep the British from capturing it.

When Sea­bed Constructor docked the police was waiting for it, later divers were sent to explore the body of the ship and equipment.

Many wonder what is hiding in the ship at the bottom of the ocean. There are many speculations on what is so enticing to draw a crew all the way to Iceland, and down to the ocean floor.

“I haven’t been able to find out what the cargo was, aside from a great stock of sap used for tanning. It is valuable and can be useful for a lot of things, like for military in 1939. But I can’t imagine renting Seabed Constructor, which is costly, to get 80 year old sap can be reasonable,” says Illugi Jökulsson in a column published at Stundin. [Link in Icelandic]

According to Lárusson the ship doesn’t have any permits for research in Icelandic waters, that’s why it was directed to land in Iceland. He says it doesn’t matter if it was looking for a wrecked ship

“To find a wrecked ship you need to do explore and do research, and for that a permit is needed. This is conduct is inexcusable. This is a great ship that costs millions to run. The company operates all over the world and the managers know full well that there are rules. I find this all rather suspicious.”

According to Bragi Dór Hafþórsson, lawyer of Advanced Marine Services, this is a company that specifies in rescuing valuables from ships. In his opinion no permits are necessary.

“According to the law, a permit is needed for scientific research. My client believes it refers to natural recourses, not diving down to a known shipwreck to rescue valuables.”

He adds that the company is fully cooperating with Icelandic authorities and the police has already taken a statement from the captain.

The police is working on finding out if the company needed the permission or not. A specialist in the field says it’s unclear and that it depends on what exactly the crew was doing.