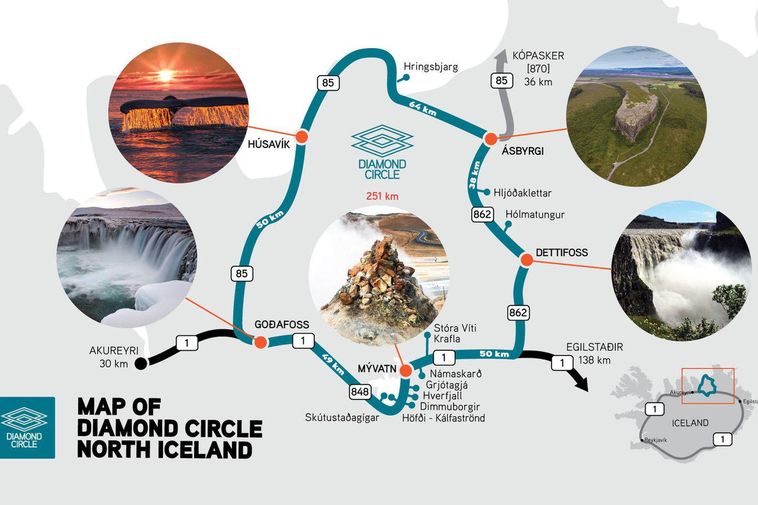 Sunday, September 6, the Diamond Circle – a 250-km (155-mi) circuit in North Iceland – will formally open, mbl.is reports. The opening ceremony, originally planned for August 22, will be held on Dettifossvegur road, near Húsavík. Representatives of the Icelandic government will be present, and Prime Minister Katrín Jakobsdóttir will address the gathering.

The Diamond Circle connects some of Iceland’s most spectacular sites, such as Goðafoss waterfall, Mývatn lake, Dettifoss waterfall, Ásbyrgi canyon, and the town of Húsavík.

Goðafoss waterfall is famous for its beauty. It cascades down a height of 12 meters and is 30 meter wide. Its name, literally meaning ‘the waterfall of the gods,’ is believed to derive from the year 1000 when Icelanders adopted Christianity, since after his conversion, lawspeaker Þorgeir Ljósvetningagoði threw his statues of the Norse gods into the waterfall.

Mývatn lake is famous for its biodiversity and birdlife. It is the fourth largest lake in Iceland, with numerous coves, inlets and islets.

Dettifoss waterfall is reputed to be the most powerful waterfall in Europe. Hundreds of cubic meters of water per second plunge down a height of 45 meters, making the average human being standing beside it feel quite small and insignificant.

Ásbyrgi is a horse-shoe shaped canyon in Öxarfjörður fjord. Not only is it a feast for the eyes, but generally  boasts much better weather than the rest of the country – at least in the summer.

The town of Húsavík has long been a popular destination – both due to its stunning location and the whale-watching activity it offers. This year, it caught international attention for being the filming location for Will Ferrell’s movie Eurovision Song Contest: The Story of Fire Saga.

For more information about the Diamond Circle and to view spectacular pictures of the sites, see northiceland.is.