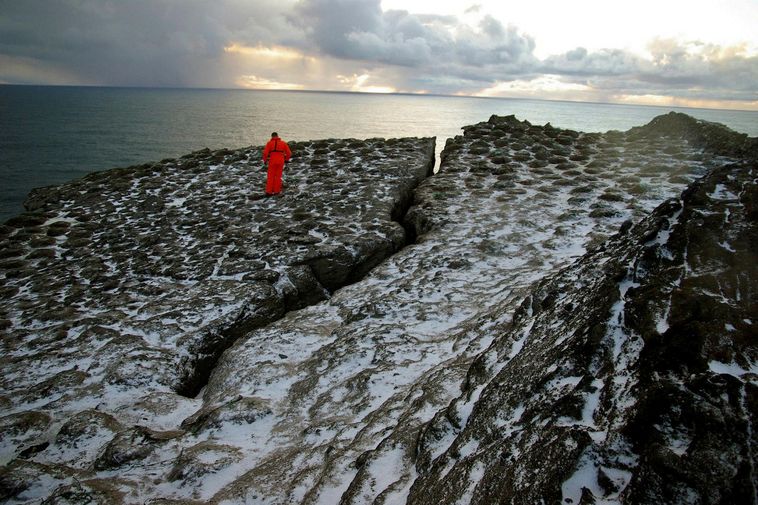 A crevice on Eldey – a sheer rock island, about 16 km (10 miles) southwest of the Reykjanes peninsula – has widened by about 3 cm since it was last measured a year ago, mbl.is reports.

The Environment Agency of Iceland, which has no explanation why this has occurred, has requested a meeting with the Icelandic Met Office and the Icelandic Institute of Natural History, to discuss what measures need to be taken in response to the news.

The crevice is on the northwest side of the island – the side that faces the peninsula. The island is a nature reserve, managed by the Environment Agency. In 2015, when equipment was installed to measure the crevice at its center, it was 59.8 cm-wide.

According to eldey.is, the island is by far the largest gannet colony in Iceland and among the largest ones in the Atlantic. About 30,000 pairs of gannets breed in Iceland, 16,000 of them on Eldey.

Sigurður Harðarson, electronics engineer, visits the island regularly to maintain video equipment for the website eldey.is (gannetlive.com), which streams live from the gannet nesting grounds on the island. He reports that the crevice has not widened until now. Last Thursday, it measured 62.7 cm.

René Biasone, a specialist in nature reserves in Southwest Iceland, states that the Environment Agency must look into the matter more closely. Should part of the rock tumble into the sea, hundreds of gannet nests will disappear.

He adds that explanations for the widening of the crevice must be sought. Eldey is located on the Reykjanes ridge, which saw a great deal of seismic activity in December. The island cannot be visited for further measurements until October, when the nesting season is over. He wonders whether the Icelandic Met Office could install automatic measuring equipment on the island, so that new developments can be monitored.