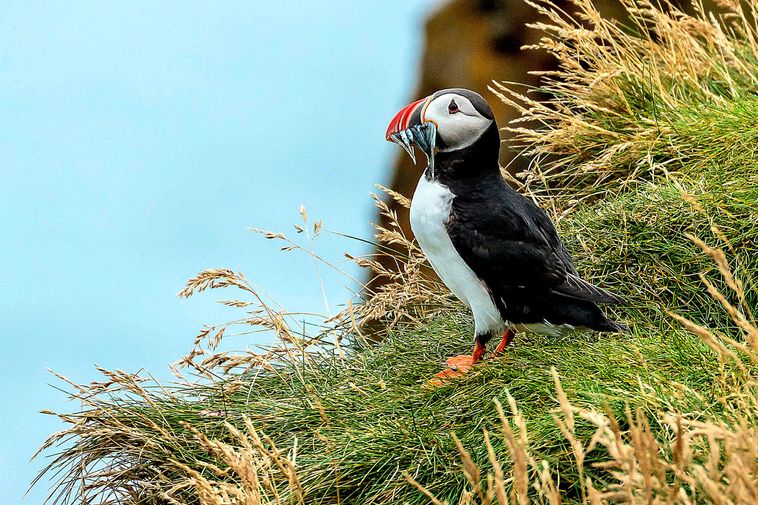 A puffin on Grímsey island, caught on camera using a stick to scratch its body, is featured in a new issue of the scientific journal PNAS, Proceedings of the National Academy of Sciences of the United States of America.

The article describes “a previously unknown tool-use behavior for wild birds, so far only documented in the wild in primates and elephants.”

Two Atlantic puffins were observed at their breeding colonies, one in Wales and the other one on Grímsey island, off the north coast of Iceland, spontaneously using a small wooden stick to scratch their bodies.

The observations are considered important in three ways:

Aside from having observed wild birds anting, i.e. picking up ants and rubbing them on the feathers, this is the first time wild birds have been seen using a body-care-related tool, thus, extending wild avian tool-use repertoire to other than food extraction.

Second, the tool use is hereby expanded to include seabirds.

Third, the observations were made at locations more than 1,700 km apart, “suggesting that occasional tool use may be widespread in this group, and that seabirds’ physical cognition may have been underestimated.”

The puffin on Grímsey island was caught on Browning motion-activated cameras, deployed near puffin nests in July 2018, (66°32′N, 18°00′W), to record patterns of nest attendance. Cameras were configured to record 10 sec of footage after each movement detection, with a minimum 30-sec pause after each video.

Do take a look at the amazing footage here, and see for yourself.