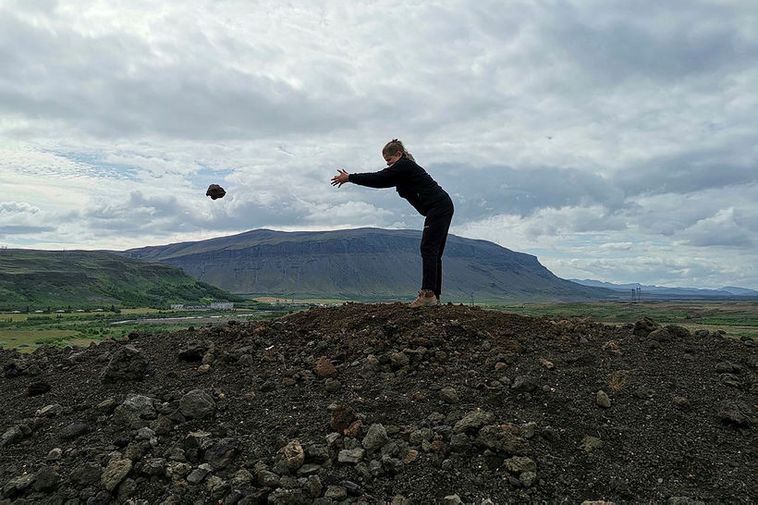 Helena, a park ranger in Þjórsárdalur, throwing away the last of 3,219 rocks from a "wart" near Hjálparfoss waterfall. Photo/Environment Agency of Iceland
Vala Hafstað
vala@mbl.is

Park rangers in Iceland have been busy lately removing warts - tourists’ “warts,” that is. This is a term used to describe cairns, which tourists make for fun. The Environment Agency of Iceland posted a statement on Facebook this week, asking people not to make such cairns.

Cairns used to be stacked to serve as guideposts, but the “warts” serve no such purpose. The unwanted cairns are called warts for a reason:  The Icelandic word for cairn is varða, which sounds not unlike the word varta, meaning wart.

“Today, rocks are stacked to form cairns in nature reserves, where they are quickly taken down by park rangers, since moving relics in nature is illegal. Rocks removed can also leave ugly marks in a vegetated area,” the post from the agency reads.

Helena, a park ranger in Þjórsárdalur, recently took down a “wart”near Hjálparfoss waterfall, which counted 3,219 rocks. It took her close to an hour and a half to take it down.

Experts have warned that removing rocks in a landscape where the soil is delicate creates the basis and beginning for soil denudation, soil erosion and hydrolysis.

Hákon Ásgeirsson, specialist at the Environment Agency of Iceland, tells Morgunblaðið that the “warts” have proven hard to control. “[Removing rocks] causes damage to the environment,” he notes, “especially in vegetated areas, and it can set off soil erosion. If we don’t remove these cairns, people are encouraged to make new ones. It’s just like tracks left by off-road driving; removing the tracks is important to keep others from following suit.”