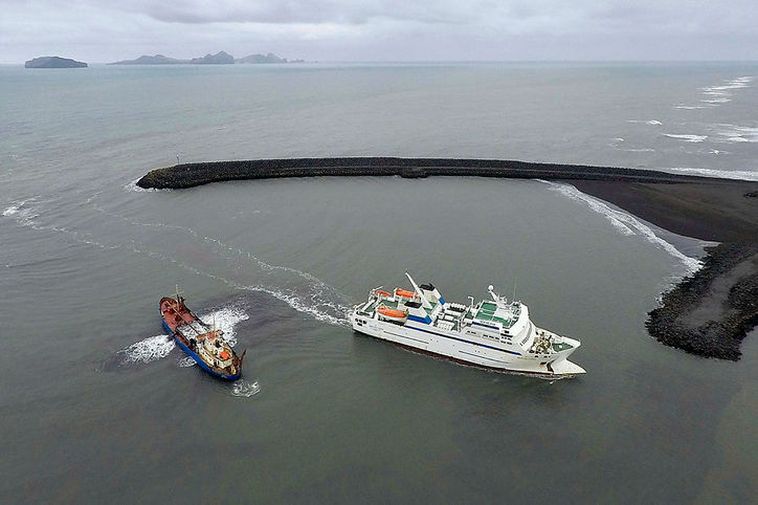 To the delight of the residents of Vestmannaeyjar islands, Landeyjahöfn harbor, South Iceland, opened yesterday for the season, shortening the ferry ride to Vestmannaeyjar considerably. It had been closed since November.

The reason the harbor can only operate part of the year is that it accumulates sand and mud every year, making dredging necessary. Due to inclement weather this year, dredging was delayed. The opening of the harbor, means that instead of a three-hour ferry ride by Herjólfur from Þorlákshöfn harbor, located about 80 km (50 mi) to the west, passengers can now get there in half an hour from Landeyjahöfn.

The ferry Herjólfur sailed seven times, back and forth, between Landeyjahöfn and Vestmannaeyjar yesterday. “The plan is to offer seven roundtrips a day every day,” states Guðbjartur Ellert Jónsson, CEO of Herjólfur ohf, the company that operates the ferry, in an interview with Morgunblaðið. “As soon as Landeyjahöfn harbor opens, everything comes to life here on the islands. It makes such a difference to sail this short distance, compared to Þorlákshöfn. There was a complete turnaround in terms of tourist traffic. From what I can tell, business owners are smiling from ear to ear.”

While Herjólfur had to sail from Þorlákshöfn, there were only two roundtrips offered a day. Guðbjartur hopes it will be possible to keep Landeyjahöfn harbor open all summer. Dredging of the harbor will be done by the company Björgun at night. The weather forecast looks good for the coming days, making conditions favorable for dredging.

Due to the delay in opening the harbor this year, businesses on the islands had numerous cancellations. The Eldheimar volcano museum saw a sudden stream of tourists yesterday: “We opened at 11 this morning, and in two hours we earned as much at Eldheimar as we did during two whole weeks in April,” remarks Kristín Jóhannsdóttir, the museum’s curator.

Landeyjahöfn harbor first opened in the summer of 2010 and ever since, its location has been strongly criticized. Originally, the harbor was expected to be usable for all but seven days of the year, but those days turned into about six months. Among critics of the harbor is Halldór B. Nellett, captain of the coast guard ship Þór. He was interviewed by Morgunblaðið yesterday. In the interview, he points out that already in 2010, he and others warned the Icelandic Maritime Administration that the harbor was badly located and poorly designed.

He says he is puzzled by the fact that the harbor was placed near the mouth of a large river, which constantly carries sand into the ocean. The cost of dredging the harbor has already exceeded the cost of building it. Now, he states, the only solution is to find ways to protect the entrance to the harbor from ocean waves by building jetties.

"Too many rental cars in Iceland"