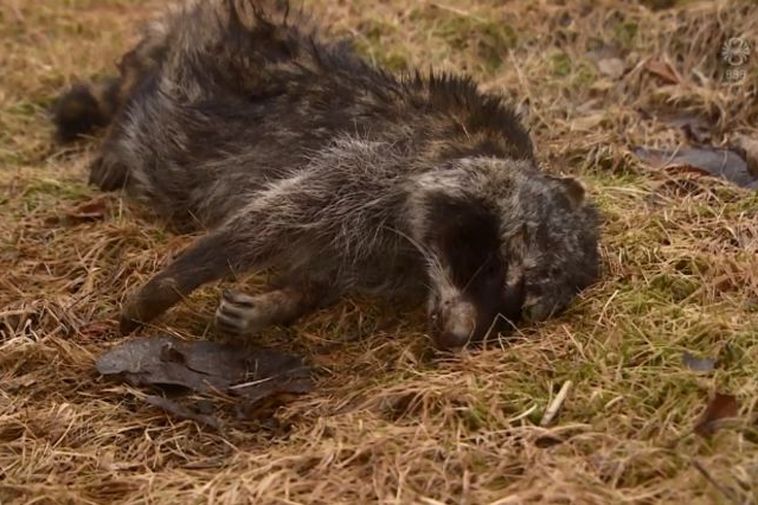 The raccoon was living in some sort of burrow or hole in the ground near Hafnir. Screenshot/ Rúv
A raccoon was caught near Hafnir in Reykjanes yesterday. The animal was living in a burrow there. Raccoons are not native to Iceland but have been spotted here before.
This raccoon was found by Birgir Hauksson and his dog Tyson, reports RÚV national broadcasting service. "The dog found it. We were looking for seashells in Hafnir and I thought he had found a mink. But when I heard different sounds coming from the burrow I investigated further," said Hauksson interviewed by Rúv.
The dog and the raccoon fought and then Hauksson shot it. He said it's the first raccoon that he's caught in Iceland.
This news came as a great surprise to many Icelanders last night who thought raccoons had never been seen in Iceland before. However, Lemúrinn reports that in the year 1930, raccoons were imported to Iceland for their fur.
They were imported by bookbinder Ársæll  Árnason from Germany.  He lived in central Reykjavik and the raccoons lived in his home in Sólvallagata. They had cubs who were kept as pets by the family's children. Eventually thought the racccoons were sent to a fur farm in Garðabær, from which one escaped and then they were sent to the Westman Islands where they seem to have caused quite a raucous. They were eventually killed.
In the seventies, another couple of raccoons were imported to Iceland, and this time to the Sædýrasafnið zoo in Hafnarfjörður.
A couple of racoons were spotted in the eighties and nineties who seem to have somehow made their own way to Iceland. Where the raccoon found yesterday came from is still a mystery.
"Either this animal was smuggled to Iceland or it came by accident in a container or an airplane," said a local vet to Rúv. He furthermore said that raccoons are not dangerous. "No they would defend themselves if attacked but they're rather jolly, friendly animals."
Raccoons can however bring diseases with them, even rabies so according to Icelandic law they must be killed if found in the country's fragile nature.
You can watch the report on RÚV HERE.
Facebook
Twitter
Email
Reddit