Drangey Island soon to open for the summer 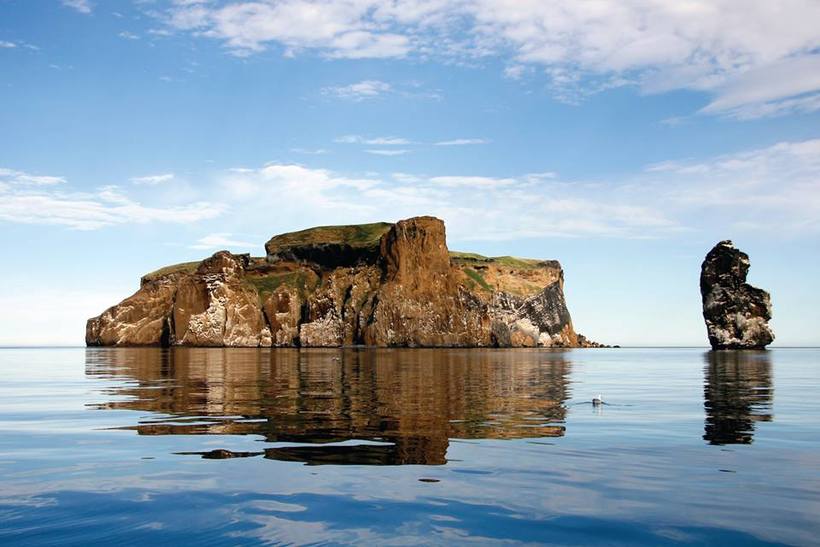 A group of locals in Skagafjörður, North Iceland, set out for Drangey Island last weekend to prepare it for summer. Winter storms often break up parts of the port and affect other structures, and every summer a group of locals set out to fix it.

Drangey is a tall island, reaching 180m at the highest peak. It has a flat surface but the sides are great cliffs full of seabirds, puffins in particular. It’s a popular destination to explore nature for both local and foreign tourists. Locals from the area also visit the island to hunt birds and gather eggs. 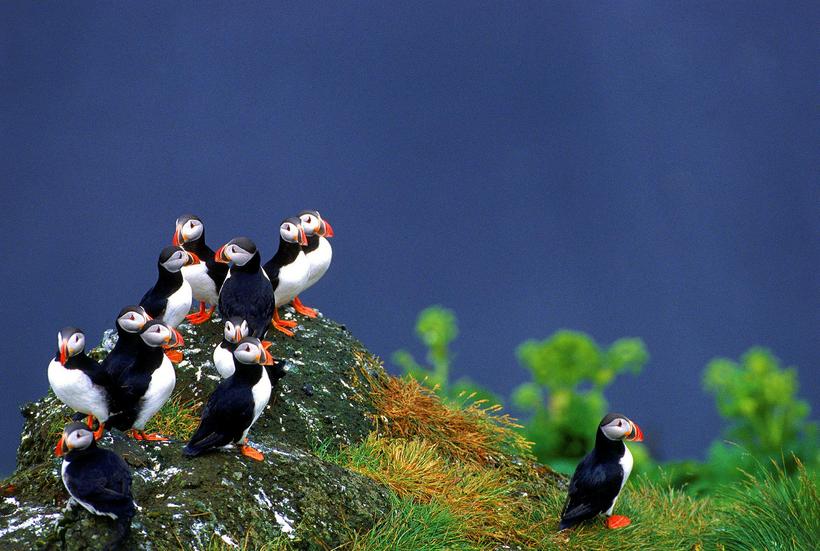 Drangey is one of the biggest puffin colonies in the area Photo: Iceland Monitor/Rax / Ragnar Axelsson

Tours every morning over the summer

Two of these locals take tourists on tour to the island. Their company, Drangey Tours, is a small family owned company, run by a father and son. Their family has been sailing to Drangey for generations, the grandfather often referred to as the Earl of Drangey. The son and the guide in these tours, Helgi Rafn Viggósson is says his own five year old son is in training, that he knows nothing better than to visit the island.

The tours go every day at 10 am from Reykir, a few kilometres north of Sauðárkrókur, the biggest town in the area (Reykir is also where you can find Grettislaug geothermal pool, a favourite among locals and those who visit the area). The company seems to be run on the spirit of the Icelandic saying “þetta reddast”, which roughly translates as “things will sort themselves out”. Viggósson said that if there were too many wanting to go on the trip, and won’t fit in the boat, they would simply solve it with going another tour. And another, and another, as required. 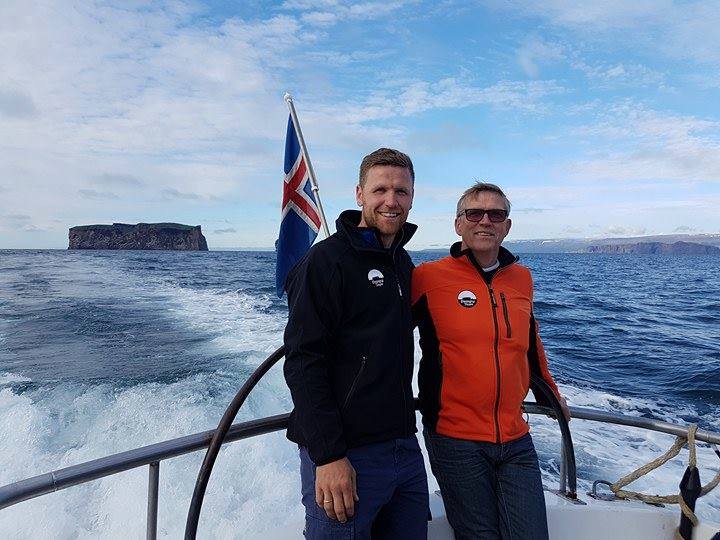 Drangey is one of the largest puffin colonies in Iceland, and opposed to the dwindling numbers of puffins in South Iceland, the stock in Drangey is growing. Just watch your feet while walking on the island, as they dig holes to nest in unlike most birds.

The island is located in the middle of Skagafjörður fjord and the view from the highest peak is breath taking. “When we get to the top we set down and have a cup of coffee. The view is amazing, from there you see the whole fjord,” says Viggósson.

Drangey is a place of stories. There are a number of folk tales that happen on the island, stories of evil creatures, hidden people, sea monsters and more. The most famous story is Grettissaga, a centuries old Icelandic Saga, which tells the story of outlaw Grettir the Strong who lived in the island and use to swim to Reykir every once in a while. There he supposedly bathed in the geothermal pool, named after him. 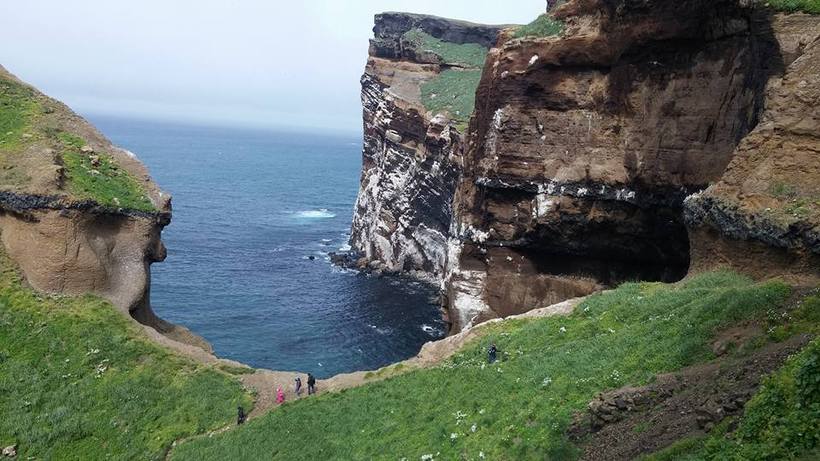 Only accessible in summer

It’s only possible to visit the island in summer, so the tours are only available from May 20- August 20. It’s a particularly popular tour among Icelanders, who according to Viggósson make up for 40% of their guests, which is a high percentage in a country where tourist greatly outnumber the locals.

An easy climb to the top

Even though the island is so tall and the cliff so steep, the climb up isn’t difficult. “I think the oldest person that came with us last year was 87, and in the same tour there was a two year old,” says Viggósson.

“Some people that come on the tour are afraid of heights, but usually end up at the top anyway with a little encouragement. They just go up on their own pace. Few decide to stay back in the boat, though some do. People know their own limits, but the view is great from the boat as well.” 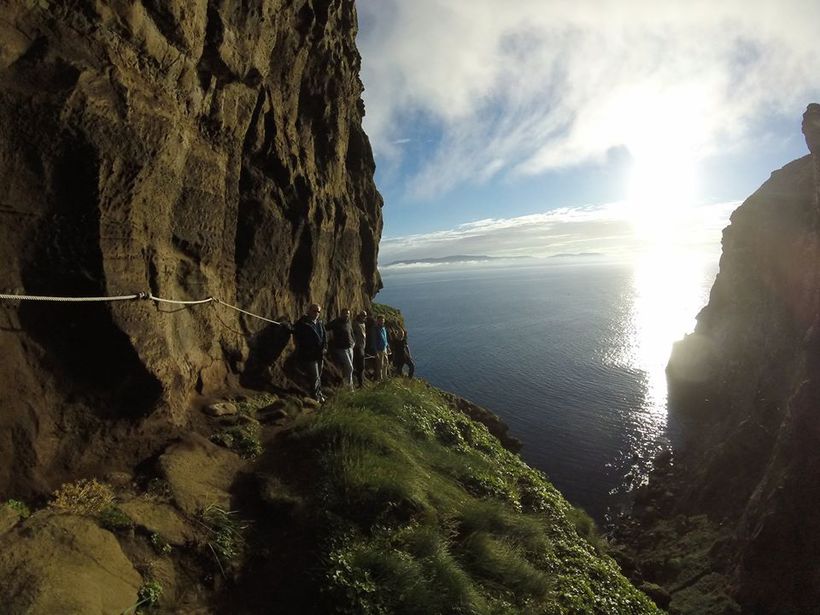 Viggóssons family has been sailing to Drangey for generations. Both with tourists and to hunt birds and gather eggs. Seeking food in Drangey is a centuries old tradition, the additional food was very important to the survival of locals.

Helgi and his family still do this, the old way. Hanging from ropes from the edge of the cliff to gather eggs, using nets to catch birds. “It’s the same with this and with anything else, it’s important to keep these old traditions alive. Not to forget how people used to live.” 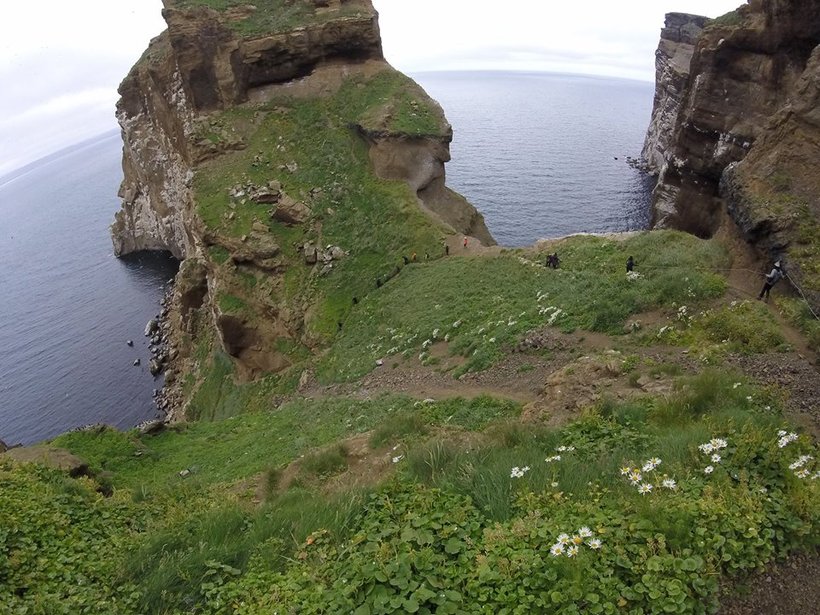 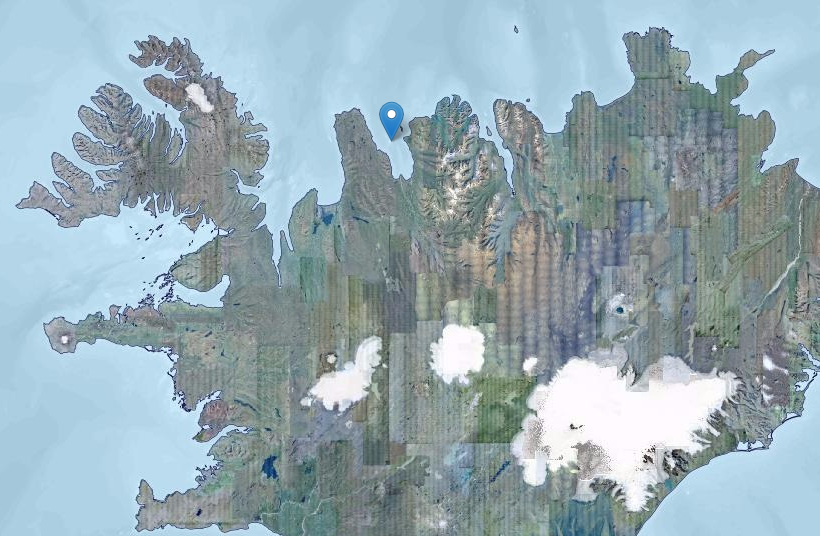 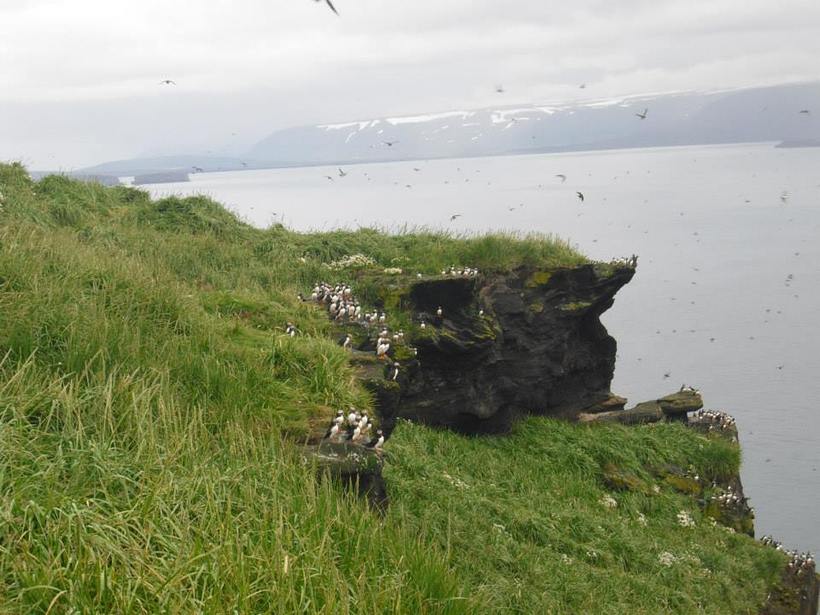 Drangey is home to many different type of sea birds. Photo: Drangey Tours 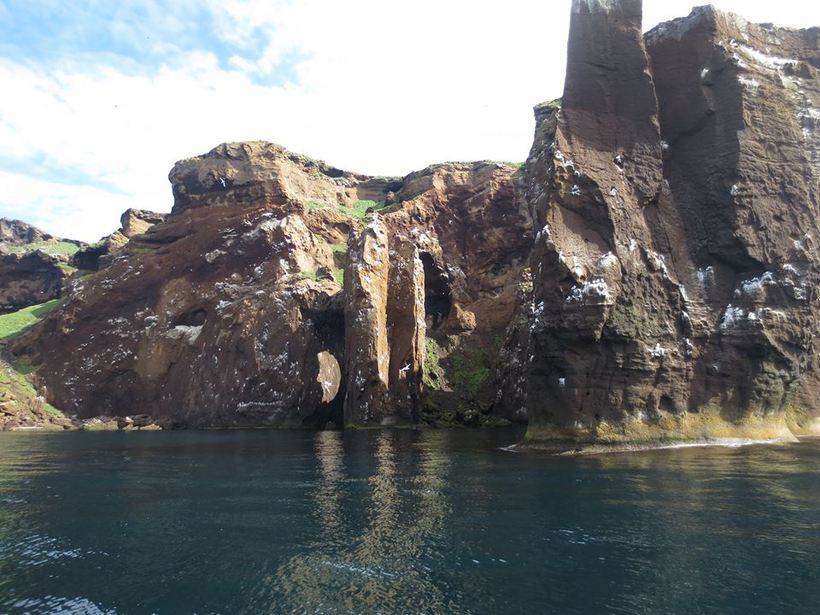 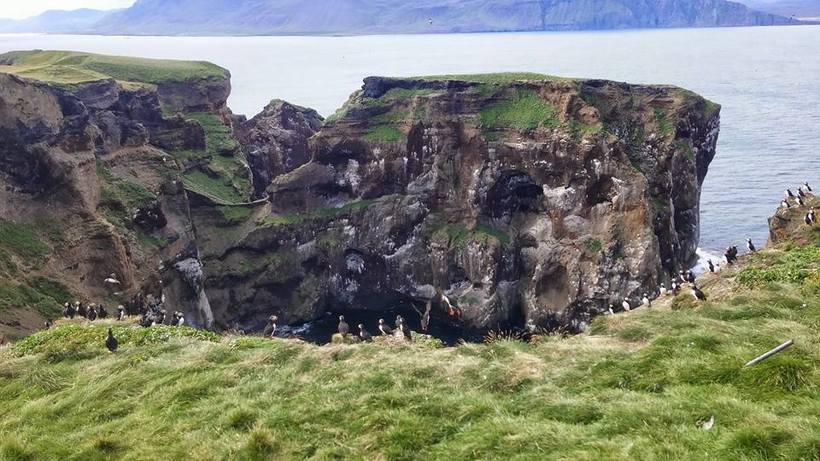 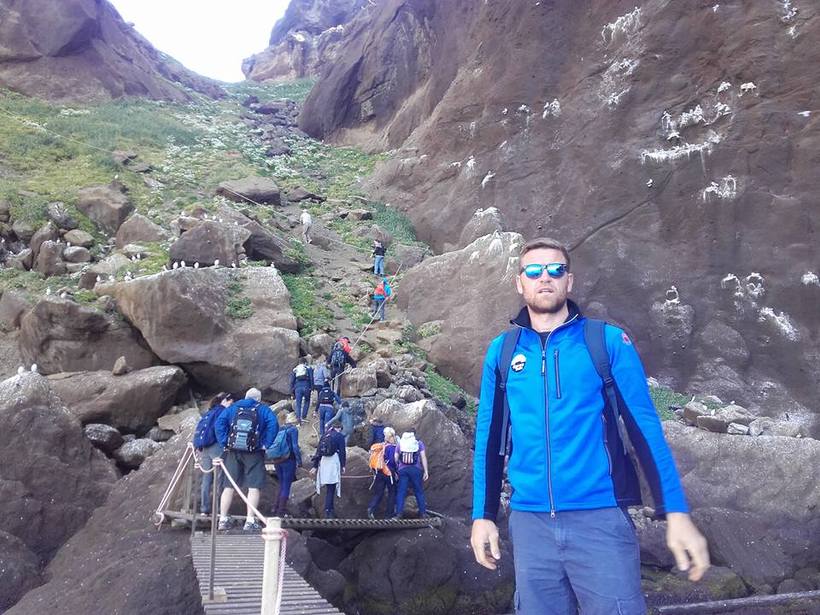 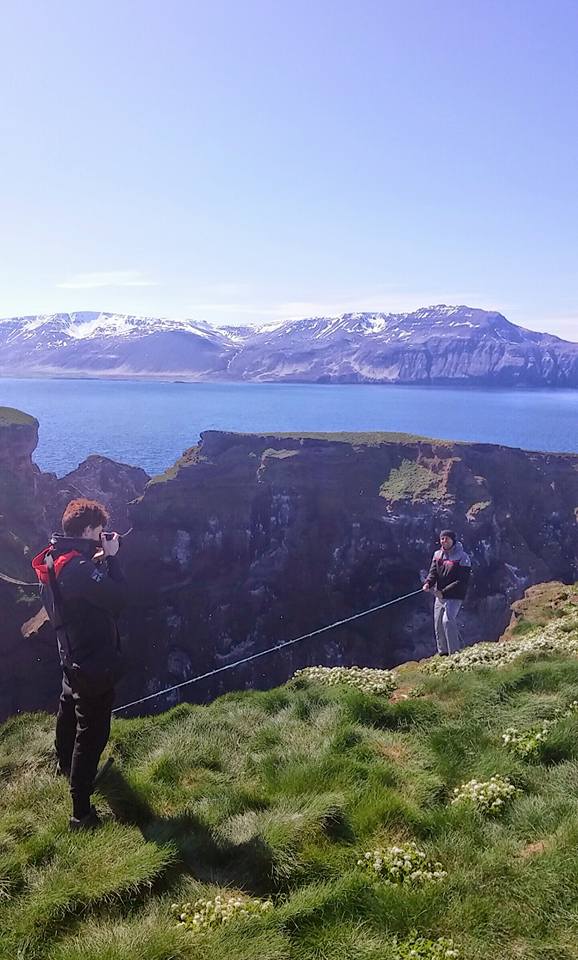