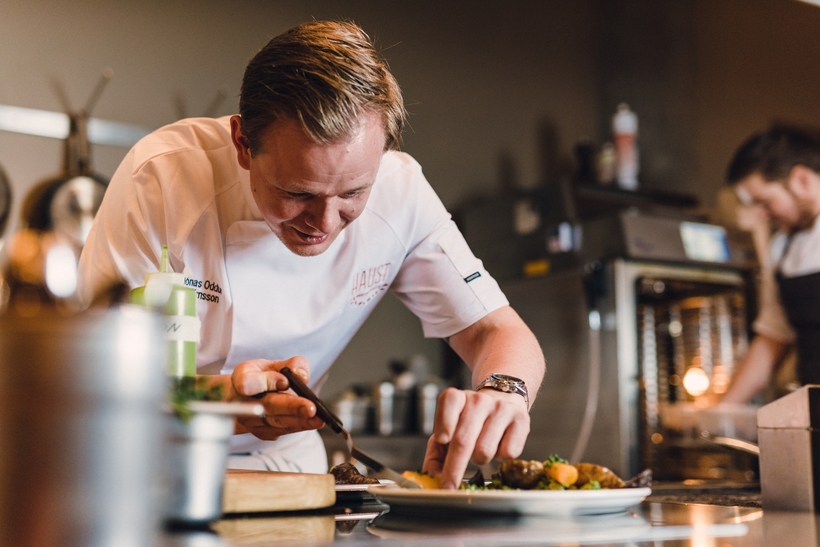 Chef Jónas Oddur Björnsson uses blackened garlic as one of the ingredients to create that exquisite "umami" taste. Photo: Fosshótel

The largest hotel in Iceland, Fosshótel in the central Borgartún area opened last year. The hotel formelly opened its in-house restaurant, Haust, spearheaded by the culinary art of Michelin chef Jónas Oddur Björnsson whose great ambition is the savoury taste of "umami" the famous fifth taste.

Fosshótel Reykjavik is situated in what Icelanders sometimes call 'the financial district', an area close to the city centre mostly recognised for modern high-rise buildings on the coastline occupied by banks and various other companies. What's so wonderful about the area is its very close proximity to the now gentrified square of Hlemmur, and the fact that these two districts have joined up to become the city's most up-and-coming area with bustling restaurants, plenty of hotels, delis, bars and shops. Hlemmur, a former bus central which only a few years ago as a rather seedy place to hang out, will be transformed into a fancy food hall later this summer, further bringing life into the area. 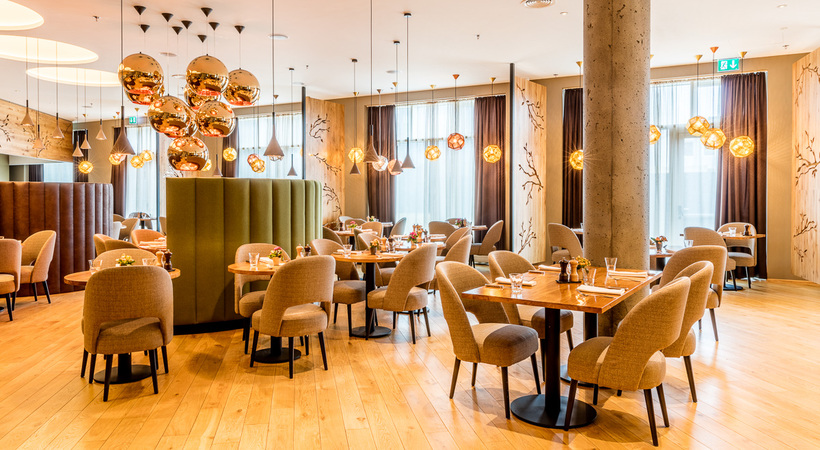 The new Fosshótel is a huge, shiny, and not particularly appealing high-rise hotel that conceals two very classy and cosy establishments: Bjórgarðurinn, a hip pub/wine-bar which opened last summer, and Haust (meaning Autumn),  a high-end restaurant for fine dining.

The food at Haust is simply astounding. It simply offers an elegant, delicate taste experience that is completely unique and obviously extremely carefully created by Björnsson, the head chef. He told me he only recently moved back to Iceland to jump at the opportunity to head the culinary team at Haust. Previously, he spent many years working at M ichelin restaurants both in France and Scandinavia. He's also been a popular personal chef for major celebrities whose names shall remain a secret.

My first course of the evening was an amuse-bouche of Edzell blue potatoes, pickled onions and burnt butter, served with a twist on the Icelandic rúgbrauð - sweet sourdough rye bread. This was followed by the chef's version of bouillabaisse , melt-in-the mouth langoustine with carrots, seaweed, ginger and chili with a gorgeous savoury broth. The taste made me exclaim to my dining partner, "This is the pure taste of umami, it has to be!" That strong, perfect savoury flavour, the perfect balance of sweet, sour, salt and bitter. 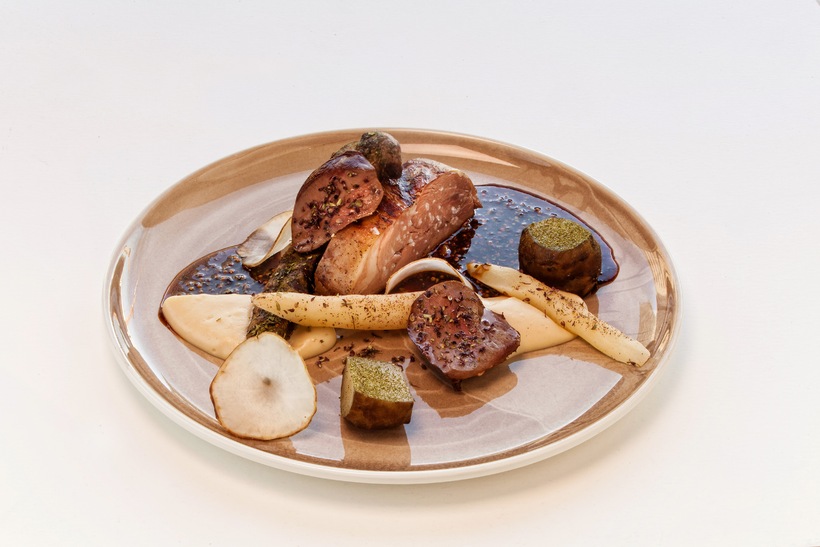 The food at Haust exudes a sense of French culinary elegance. Photo: Fosshótel

When the chef arrived with our main course, Icelandic foal with mushrooms, kale, hazelnuts and his own speciality, blacklick, garlic cooked for thirty days until it turns black, he explained that the umami taste was exactly what he was aiming for, wishing to create a very unique taste for the restaurant. The black garlic is nothing like normal, raw or cooked garlic, it exudes that gorgeous, moreish savoury flavour beloved throughout the centuries of fine cooking.

I believe it was 19th-century chef Escoffier, the inventor of veal stock who first came up with the theory of the fifth taste, and indeed Haust exudes that sense of French culinary elegance.

The main course was my ultimate favourite part of my dining experience: the foal was incredibly tender, covered in a thick beef glaze, with hazelnuts and flakes of black garlic, a truly mouthwatering experience. I have to admit that foal is something that I've only recently had an appetite to eat, due to former years of horsemanship. My mind changed however when I first tried it: it's a lean, healthy, organic meat, from foals that are free to roam the countryside all summer long. Personally, that beats eating battery farmed chicken any day.

Our main course was followed by three dainty slices of Icelandic cheese, including "mysuostur," an Icelandic speciality made with mysa (whey) which has a distinctive caremelised taste. This was served with a compote made of figs, brioche and a glass of white port.

Next up: A refreshing mise en bouch e of fresh berries drenched in a shot of vodka and a garnish of liquorice powder, followed by a deliciously tart dessert of Italian-inspired olive oil cake, lemon cream and lemon sorbet, a perfectly light ending to an outstanding meal.

Haust also prides itself on an ambitious wine list and I thoroughly recommend going for the chef's Four Course Favourites, where you get four courses, each accompanied by its own fine wine.

For reservations and further information, you can visit their website HERE .