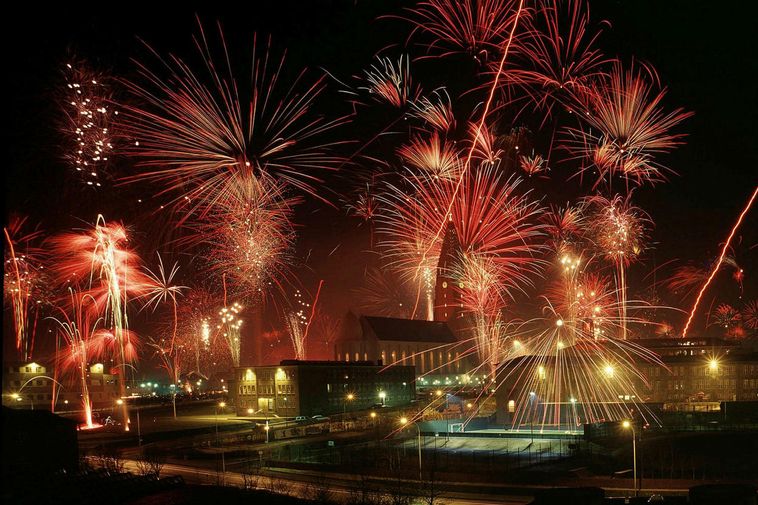 People in Southwest Iceland have a reason to praise the weather gods today for bringing us heavy rain and strong winds. This is their way of cleaning the air of all the pollution created last night from our annual fireworks craze.

We wake up in clean air with a relatively clean conscience: the mess we created last night long gone. By the time most of us wake up, Nature’s pressure washing will be done, and the sun might even smile to us briefly in the afternoon.

And when the nation finally gets out of bed, you can be certain that the only topic of discussion will be what managed to stop us for an hour last night in our fireworks frenzy, between the hours of 10:30 and 11:30 pm.

You may have noticed that the only souls outside during that hour were dog owners, seizing the sole chance of the night to take their dogs out without exposing them to the risk of getting a nervous breakdown from the deafening noise of the fireworks.

During that hour, the water usage of the nation would be next to none, because no one in their right mind was about to waste time going to the bathroom. What now ensued was a fight for the best seat in front of the TV. Áramótaskaupið—the New Year’s Eve comic show—was about to begin on RÚV, the national broadcasting station.

It is safe to say that no program is as widely watched in the country as this show. This is when the nation’s comedians take a look back at the year’s events, depicting them in a comic light.

No matter what you think of the show, most often referred to as “Skaupið,” you need to be aware that this is all the nation will be talking about today—be it at cafés, among friends or on social media. The good news is that you, too, can participate in the discussion. The show can be watched here online with English subtitles.

And if you happen to be among the unfortunate people whose birthday it is today, have a happy birthday! Don’t blame it on your mother that she delivered you on the only day of the year when no one has appetite for cake with whipped cream, and when no one is in the mood to party.