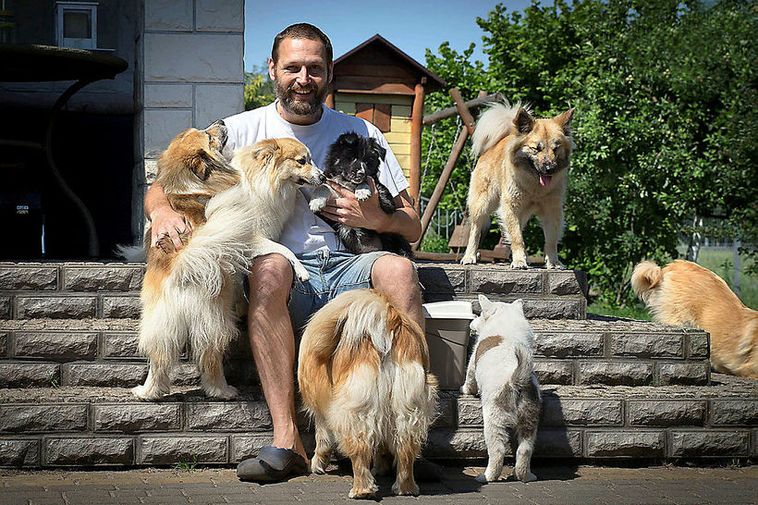 He states that the personality and characteristics of the breed suited him and his family perfectly. The family dreamt of getting such a dog, which proved complicated, because there was no Icelandic Sheepdog breeder in Eastern Europe.

At the time, Mariusz knew of only two such dogs in Eastern Europe: one in Poland and one in Estonia. After a year-long search, he finally got in touch with a breeder of the Icelandic Sheepdog in Holland. It was from him that he purchased his first such dog, Gratis Grettir.

Presently, the family owns six grown dogs, purchased in Holland and Sweden. Mariusz reports that two other families in the area, friends of his, have followed in his footsteps and are now breeding the Icelandic Sheepdog.

All the dogs have Icelandic names, provided to him by his friends in Iceland. “Every name has to be approved by the natives,” he asserts. Some of the names he has already given his dogs are Afar Hvítur, Áfram, Bjarmi, Dama, Elska Pólska og Engill.

Mariusz describes the personality of the Icelandic Sheepdog as unique, reminding him in many ways of a human being. The dog has a cheerful temperament, he adds, and is a perfect family dog. Mariusz’ three children get along very well with the dogs. He finds it important for children to grow up with dogs. That way, for example, they will learn to be responsible for others.

Mariusz is very interested in Iceland. In his pastime, he has read about the country’s history, and he is a fan of The Sagas of the Icelanders, his favorite one being The Saga of Grettir the Strong. No coincidence, then, that Mariusz named his first dog Grettir.

“We dream of visiting Iceland one day,” Mariusz states. “Until then, part of Iceland is with us – the Icelandic Sheepdog.”