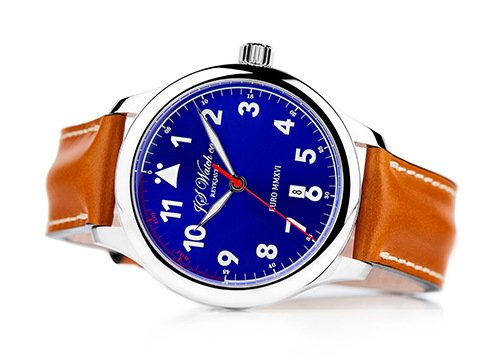 If you're a die-hard fan of the Icelandic men's national fooball team, who are doing great things at Euro 2016, you could invest in a limited edition watch created in celebration of the team qualifying fo the UEFA championship for the very first time.

The EURO MMXVI Limited Edition was created by Iceland's famous watchmakers, JS Watches. As it says on their website: "With a population of around 330,000, Iceland is by far the smallest nation ever to qualify for the European Championship. The team also made history by reaching the qualifying play-offs for the 2014 FIFA World Cup. Led by former long-serving Sweden head coach Lars Lagerbäck they finished second in their qualifying group, missing out on a place in Brazil after a 2-0 aggregate defeat by Croatia. It was their best ever performance in a major competition, eclipsing their valiant effort to qualify for UEFA EURO 2000 when only a last-day 3-2 defeat in France eliminated them – but even better was to follow as Iceland claimed second place in UEFA EURO 2016 qualifying Group A to reach a major tournament for the first time."

The watch comes in a 42 mm steel case made from the finest German surgical grade Stainless Steel "316L" with a curved anti reflective sapphire crystal and see-through sapphire crystal back, blue sunburst dial with white numerals representing the shirts and numbers of the players, 11 players, 45 minutes of game time and 15 minutes for half time with white luminous on numerals and indexes, date display at six o'clock and rhodium plated hands with white luminous.

The watches are available in the JS Watch shop on Laugavegur or online at www.jswatch.com

Watchmaker to the stars