Whaling in Iceland recommences and byproducts used for medical purposes 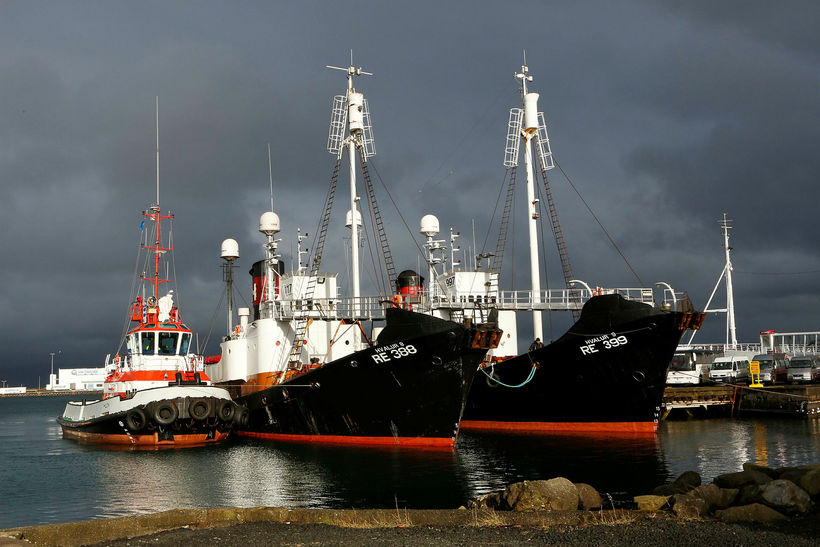 Whaling has recommenced in Iceland and whaling company Hvalur hf has permission to hunt 161 fin whales this summer as well as using 20 percent of last year's quota, reports today's Morgunblaðið.

Whaling in Iceland has been under strong criticism for many years.  In 2016 the US said they may institute economic measures against Icelanders whaling.

Hvalur hf had not hunted fin whales since 2015. Minke whales however are caught annually according to a set quota.

Fin whale not endangered in the North Atlantic

Hvalur hf. is working in cooperation with scientists at the Innovation Center in Iceland and the University of Iceland on two areas of interest. One is how fin whale meat may improve the health of people with anaemia and the other is the use of gelatin from fin whale products for medical purposes. Both areas are of great interest, according to an announcement from Hvalur hf.

The announcement is as follows:

According to World Health Organization (WHO) about 30 % of the human population (two billions) suffers from nutritional iron deficiency, in particular people living in non-developed countries. About 50 % have iron deficiency aemia. WHO considers nutritional iron deficiency to be one of the most prevalent and serious health problems in the world with profound negative effects on health and social functions. Children and women of childbearing age are the most vulnerable groups. Adults experience fatigue and reduced working capacity, and infants are at risk of poor psychomotor development.

More than 50 years with trials worldwide in order to establish a sustainable supplementation regime with iron salts (inorganic iron) to prevent iron deficiency, has failed. The main reason is low bioavailability of inorganic iron due to a vegetarian cost which facilitate the formation of non-absorbable complexes of iron and plant elements like phytate, tannins, polyphenols, etc. Furthermore, compliance is frequently hampered by painful and troublesome side effects from the stomach and bowel (nausea, diarrhoea, etc.).
The absorption rate of inorganic iron is in the order 5-12 % of a swallowed dose. In contrast, absorption of heme-iron which is the natural, organic iron molecule in animal tissue (blood, muscle), is 12 – 25 % (or even higher), with the highest absorption rates in people with iron deficiency.

Heme-iron can not be synthesized chemically, so the only practical source is animal food, first and foremost meat. In the gut, the heme iron is absorbed unchanged without side effects.  The content of heme-iron is highest in meat from marine mammals, about 8 - 10 times higher than in beef. Thus absorption of iron from food with equal doses of hem-iron and inorganic iron, is much higher for heme-iron and requiers much smaller doses. In contrast to beef, whale meat is sufficently enriched with hem (myoglobin) to be a potential source for making a heme-iron supplementation product which in an acceptable dose will satisfy the daily need for iron. In additon, a meat product will also provide the consumers with other micronutrients, vitamins and protein which is urgently needed in large populations with chronic shortage of food and hunger.

Research is underway for mapping the concentrations of inter alia hem-iron, inorganic iron, and other micronutrients in fin whale products. Also ongoing is the development of suitable treatment methods of fin whale products to ensure expedient storage, transport, and consumption. Finally, research is underway to explore the potential use of a hem-iron meat product, to contribute to the effort of finally being able to combat iron deficiency. WHO has declared a „UN Decade of Action on Nutrition (2016-2025) to eradicate hunger and prevent all forms of malnutrition worldwide, particularly (...) anemia in women and children among other micronutrient deficiencies." 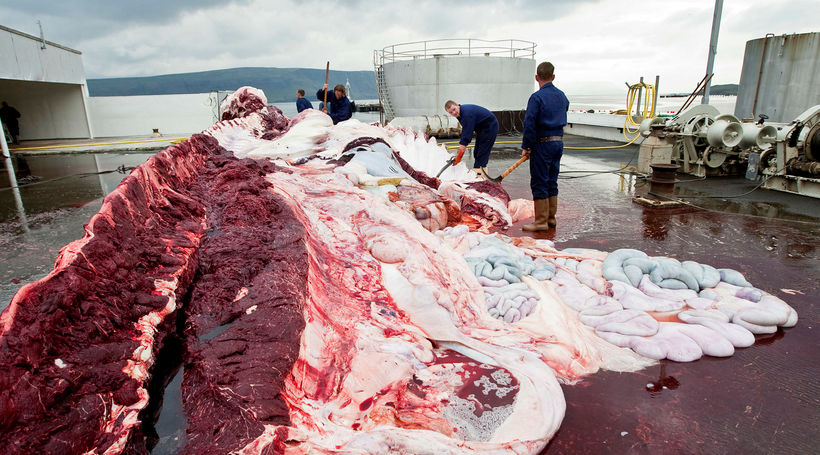 A fin whale being cut up for meat at the whaling station in Hvalfjörður, Iceland. Ómar Óskarsson