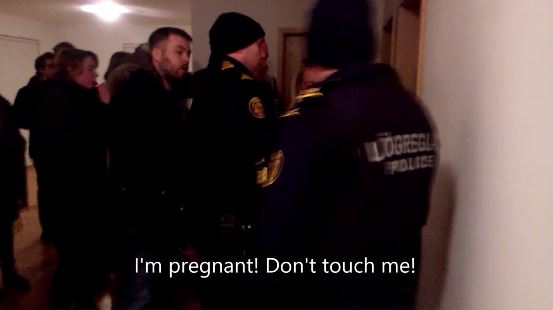 Police trying to deport the family on Tuesday night. Screenshot/Facebook

Police came to deport a family of four on Tuesday night but protests and advice from the child protection services in Reykjavik halted the proceedings. The future for the family is still uncertain.

Lawyer for the family, Árni Freyr Árnason says that the proceedings have just been postponed and doesn't know when the deportation will take place.

The family are Abdelwahab Saad who fled polical persecution in his homeland, Togo, and his wife Fadila, from Ghana. They came to Iceland two years ago as asylum seekers. Fadila was pregnant with her son Hanif at the time. Since then the couple have had a second child, Jónína. Both children are therefore born in Iceland.

Police arrived at the couple's home in Reykjanesbær on Tuesday night to deport them as the asylum appeals board at the Icelandic Directorate of Immigration had reached a decision to send the family to Italy.

Árnason received news of this decision ten days before the deportation was to take place. He does not know whether the family will receive any notificiation before the next attempt.

"Their judicial status has not changed," says Árnason despite the fact that the deportation was called off on Tuesday.

When police showed up on Tuesday, friends of the family and media showed up and a video of police proceedings was distributed on social media. Árnason says that due to the situation police decided to call off the proceedings. Someone from child protection services had been called in and advised police to postpone the proceedings for the welfare of the children.

Árnason says that Saad had been awarded asylum and a residential permit in Italy. The Icelandic Directorate of Immigration had come to the conclusion that Saad and his family could go back to Italy to reapply for asylum there.

He sayst that he had asked the appeals board to reconsider the matter seeing as the children are so young and both born in Iceland. "If nobody changes their mind the family will be deported soon. Unless a Minister in the government listens to the case, it's happened before and it's their only hope."

The video below was shared by activist group Ekki fleiri brottvísanir (No more deportations).

A list of signatures is being collected by Icelanders to help the family to remain in Iceland.