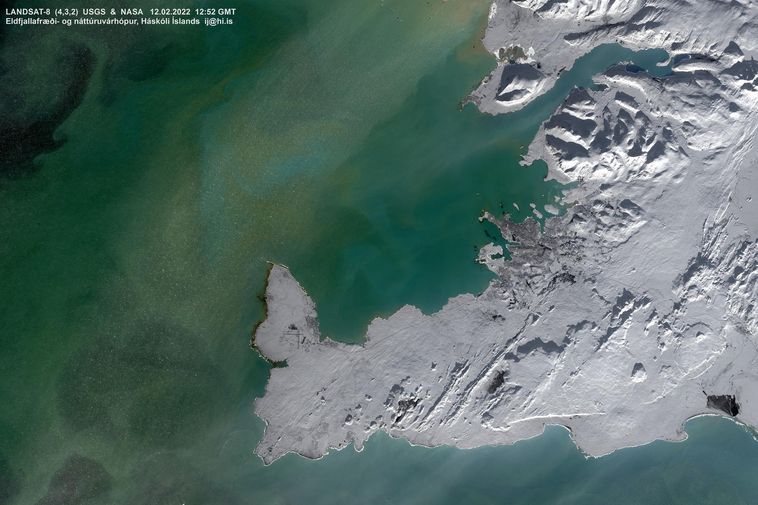 Reykjanes peninsula, seen from a satellite on Saturday. To the left of center, you can see that lava still melts the ice (black spot). Photo/LANDSAT-8
Vala Hafstað
vala@mbl.is

Inflation continues on the Reykjanes peninsula, Southwest Iceland, Morgunblaðið reports. Scientists at the Icelandic Met Office keep monitoring inflation closely in other parts of the country as well, including in Askja volcano, north of Vatnajökull glacier, and in the Grímsvön volcanic system, under the ice cap of Vatnajökull glacier. Inflation is an indication of activity in the volcanoes.

In Reykjanes, land inflated prior to the eruption last year (which lasted March 19-Spetember 18) and in its wake until a new magma intrusion occurred before the end of the year. Since then, inflation has resumed.

“The inflation originated at considerable depth,” states Benedikt Gunnar Ófeigsson, deformation scientist at the Icelandic Met Office. Its center is somewhere in the area under Fagradalsfjall mountain. It is difficult to locate precisely. What this likely indicates is that magma is accumulating at a depth of approximately 12-16 km.”

Connection has been lost to most monitoring devices of the Icelandic Met Office located in Askja volcano. Still, signals are still being received from one station, located in the slope of the volcano, showing signs of inflation, which doesn’t appear to be slowing down.

“But we can’t say precisely how that is developing, since this is only one station, farther away [from the others],” Benedikt explains. “But based on what we saw before the connection to the stations was lost, it is clear that there is every indication inflation is taking place. Most likely, magma is accumulating at a depth of about 3 km.

“That doesn’t necessarily mean something will happen in the near future, but oftentimes, things happen without notice; they happen fairly suddenly. So, all we can do is follow the course of events.”

Even though the aviation color code for Grímsvötn is back to green, Benedikt states that an eruption can take place there anytime. “We’re still noting inflation, and seismic activity is increasing. An eruption wouldn’t come as a surprise. An eruption in Grímsvötn usually occurs at short notice, following increased volcanic unrest and seismic activity. It is usually detected before an eruption reaches the surface, but only a few hours in advance.”

Iceland dust plumes reach hundreds of kilometres out to sea

Iceland's geography- a volatile mixture of volcanic and seismic activity