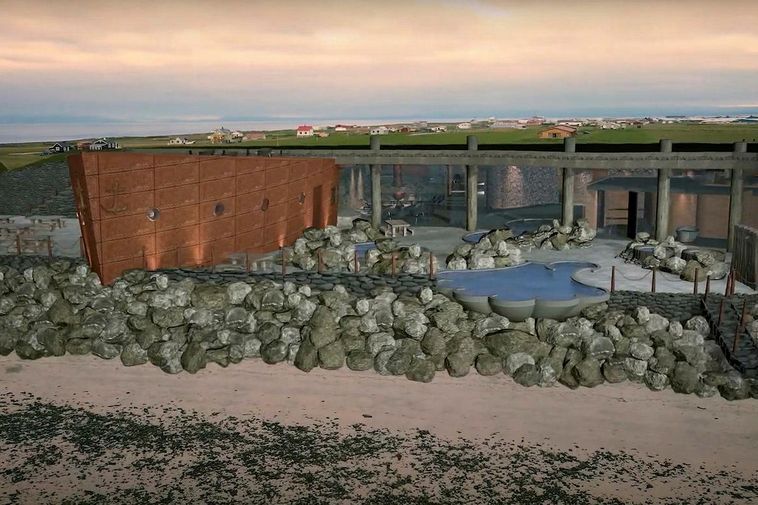 This is what the spa will look like. Computer-generated image
Vala Hafstað
vala@mbl.is

Entrepreneur Bogi Jónsson has plans to build a geothermal seaweed spa on the ocean in the village Garður on the Reykjanes peninsula, Southwest Iceland, Morgunblaðið reports.

A company, with which he is associated, recently received an ISK 5 million grant from the Suðurnes project fund for the project, which is called Mermaid — Geothermal Seaweed Spa.

Its total cost is estimated at ISK 1.3 billion (USD 10 million; EUR 8.8 million), and Bogi states its size will be comparable to that of the spa Krauma in Borgarfjörður or Fontana in Laugarvatn. The spa will employ about 45 people.

The goal is to offer health and wellness treatments, such seaweed baths, plant steam baths, traditional steam baths, massage, rest area, hot tubs and pools. Moreover, a romantic seafood restaurant with an Asian touch will be on site.

“The seaweed baths will be our distinctive feature,” Bogi states. “They have a very relaxing and beneficial effect on the body, making the skin as soft as silk. Seaweed baths have, too, been used as a medical treatment throughout history, such as for people with eczema and dry skin.”

A great deal of work has been put into the design of the spa, which will be 1,200 m2 (13,000 sq ft), in addition to an outdoor area and pools. The design will be based on the coastal culture of the area, where lighthouses stand near the shore, and the remnants of old shipwrecks serve as a reminder of the inclement forces of nature.

Negotiations with potential investors are about to begin. “[W]e’re looking for the right investors, someone with successful experience and ties to the travel industry,” Bogi concludes.

An oasis of relaxation in central Reykjavik