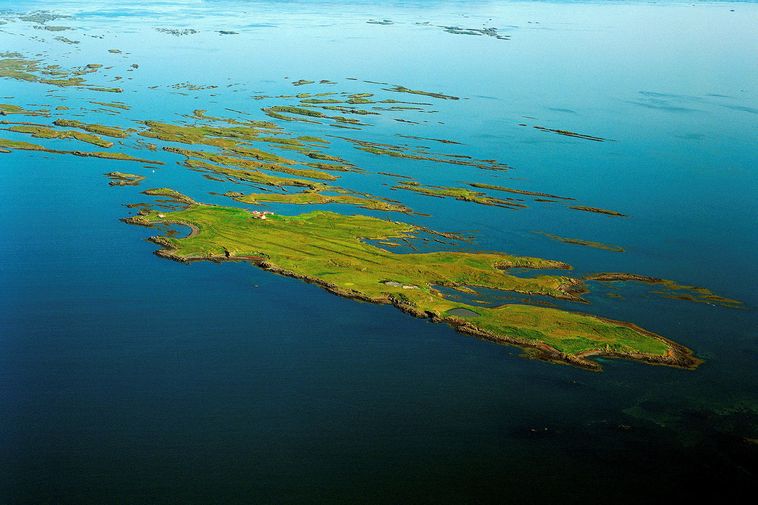 Svefneyjar islands, in Breiðafjörður bay, West Iceland, were recently sold, Morgunblaðið reports. The new owner is Austrian Sacha Tueni, the fiancé of entrepreneur Áslaug Magnúsdóttir. They live in the vicinity of San Francisco. Among the companies Sacha has worked for is Facebook, while Áslaug is the founder of Katla, a made-to-order womenswear brand with a focus on sustainability.

Áslaug states they plan to use the islands as a summer home. The islands are as many as 63, depending on how you count. They are a place where a number of eider ducks nest, the down of which is very valuable. In addition, Thorverk hf. in Reykhólar, the West Fjords – a factory that processes seaweed (ascophyllum and laminaria) from Breiðafjörður bay - has harvested seaweed from around the islands.

Áslaug states that abroad, seaweed is being used in the production of fabric. Her plan is to use Icelandic seaweed in her Katla line of clothing.

Farming was done year-round on the islands until 1979, when the framer, Nikulás Jensson, moved to Sweden. Eider down continued to be collected after that, and female lumpfish was caught, in addition to the harvesting of seaweed.

In 1993, ship-owner Dagbjartur Einarsson and his wife Birna Óladóttir purchased the islands, along with others.

Sacha Tueni purchased the islands from Dagbjartur’s children, whose ownership was 75 percent, and from oil company Olís, which owned the remaining 25 percent.