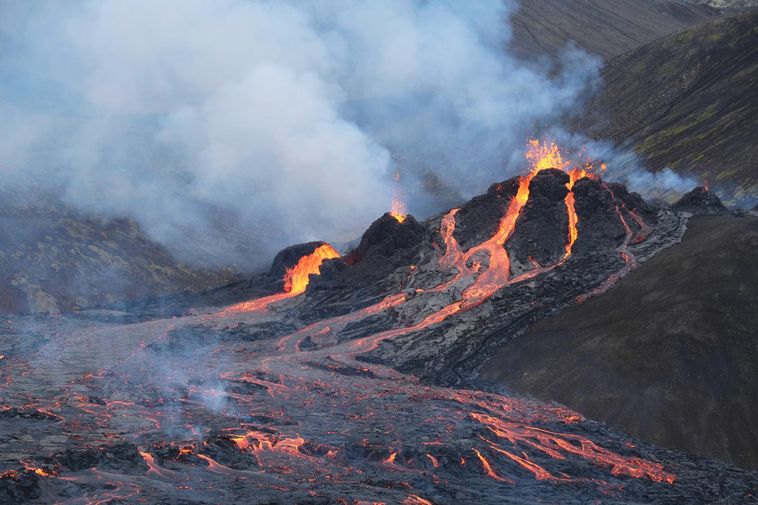 There are indications that the eruption on the Reykjanes peninsula, Southwest Iceland, which began on Friday, last week, is a shield volcano eruption – a type of eruption that hardly has occurred since the end of the Ice Age, mbl.is reports.

An examination of its volcanic products suggests that the magma flows from a depth of 17-20 km (10-12 mi), and is of a more primitive sort that we’ve seen before.

Lava flow from shield volcanoes is generally slow, but it can continue for a long time - possibly years. Such a scenario cannot be ruled out with regard to the current eruption in Geldingadalur, Fagradalsfjall mountain, states geologist Magnús Á. Sigurgeirsson. The magma flows at a volume of 5-10 m3/second.

Among well-known shield volcanoes on the Reykjanes peninsula is Þráinsskjöldur, formed about 14,100 years ago. Another shield volcano, better known, is Skjaldbreiður, northeast of Þingvellir National Park, created 9,000 years ago.

By describing the composition of the magma as primitive, what geologists mean is that its compounds are more similar to those emitted from the earth’s mantle than what is commonly seen, explains Sæmundur Ari Halldórsson, research scholar at the University of Iceland Institute of Earth Sciences.

He explains that the magma from Fagradalsfjall comes directly from the earth’s mantle, without pausing in the earth’s crust. Therefore, its composition is different from that from typical fissure eruptions on the Reykjanes peninsula – it is thinner and richer in CO2.

It is too early, though, to assert that the current eruption is indeed that of a shield volcano. Before that can be done, the eruption has to be better monitored and changes in the magma followed for some time. Sæmundur points out that although there is a resemblance to large shield volcanoes in the area, smaller lava fields with just as primitive compounds do exist there as well.

Livestream of Eruption in Fagradalsfjall