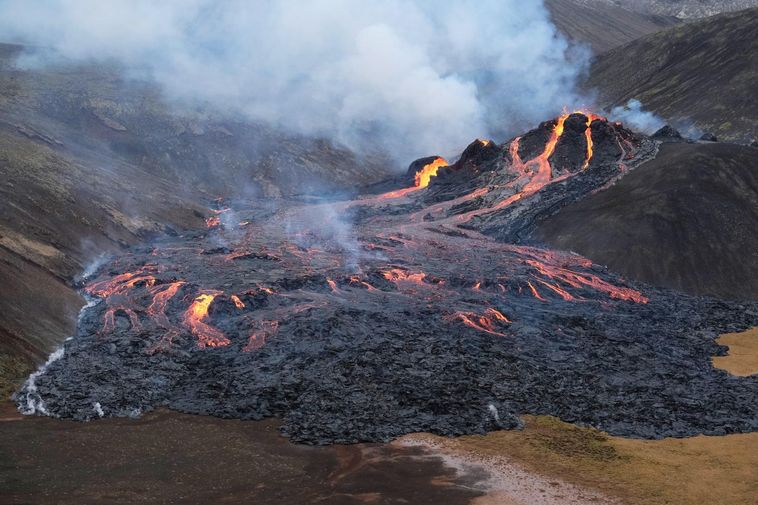 The volcanic eruption on the Reykjanes peninsula, Southwest Iceland, continues.  It started shortly before 9:30 pm last night and remains very small – so small, in fact, that when Páll Einarsson, geophysicist and professor emeritus, is asked by mbl.is whether it will be named after the valley Geldingadalur, where it started, he responds, “That is likely, but it is so small that I’m not even sure it will be given a name.” He calls it among the smallest ones in history.

The fissure is 180 meters long, with several vents, through which the lava emits.

“This [lava] flows very slowly; the series of events is very slow,” Páll states. “But because this is occurring in a valley, it is not a very good idea for people to be down there, due to the risk from gases, because the gas has a tendency to accumulate in hollows.”

“While this eruption is ongoing,” he adds, “it is not likely that another eruption will begin elsewhere. But we have to take into account that this is part of a much bigger series of events. There is nothing that indicates this activity is about to be over. Therefore, soon or at some point, another eruption could start or a new magma dyke could form.”

The last time an eruption occurred on the Reykjanes peninsula was nearly 800 years ago. Therefore, geologists have suggested that this event could mark the beginning of an new volcanic period in the area.

“The last such volcanic period lasted at least 200 or 300 years, during the first centuries after the settlement of Iceland,” Páll explains. Back then, eruptions were frequent on the peninsula, and we may very well be entering such a period.”

“Decades went by in between eruptions,” he adds. “There are signs of about 15 eruptions during those 300 years, that is, on average one eruption every 20 years, at various locations all over the peninsula. All the volcanic systems on the peninsula participated.”

All those left much larger marks than this one. “The small eruptions become hidden. This current eruption will be lost in geological history; no one will remember it in the future. Eruptions have a tendency to hide older ones…a large eruption covers smaller lava fields. I doubt anyone will count this one,” he concludes.

Even though the eruption is small, it has attracted a number of people today, who ventured toward it to see it with their own eyes.

Therefore, the Department of Civil Protection and Emergency Management has posted a list of things to watch out for if they visit the area. See here.

Mbl.is has posted the following videos from the area:

The first video was taken from the Icelandic Coast Guard Helicopter:

This video was taken by mbl.is: