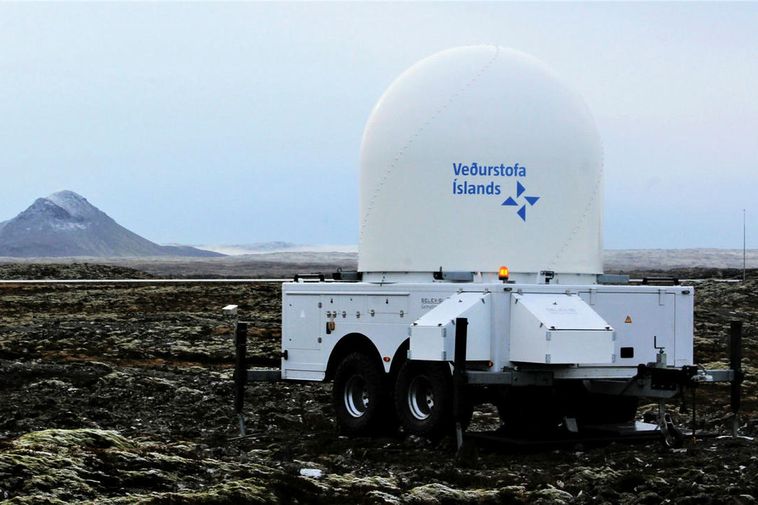 A radar that can detect volcanic product in the atmosphere has been installed by the Icelandic Met Office in a lava field on Strandarheiði, just south of Kúagerði, on the Reykjanes peninsula, Southwest Iceland, in case of an eruption, Morgunblaðið reports.

Data collected this way would be used to predict the spread of volcanic ash on major air routes over the Atlantic Ocean, in the event of an eruption. How high the eruptive column would be is a determining factor in that context, but it is important as well to monitor how volcanic ash and gases are spread near the surface.

At a meeting yesterday, the Scientific Council of the Department of Civil Protection and Emergency Management concluded that the magma dyke that extends from Keilir mountain to Fagradalsfjall mountain continues to grow and, as before, most of the magma flow is concentrated at its south end, located under and near Fagradalsfjall mountain. As long as magma continues to flow into the dyke, we need to be prepared for the possibility of an eruption, the council concluded.

The council believes that the longer the present situation continues, the greater becomes the likelihood of an eruption. The chance of such an eruption reaching inhabited areas is considered low.

The scientists noted the importance of closely monitoring the activity on the south side of Fagradalsfjall mountain to determine whether the magma dyke is growing toward the south.

If it continues to grow and to create tension in the area, earthquakes can continue to be expected, and they will be felt in inhabited areas, similar to what has been happening in recent days. The south end of the magma dyke is believed to be at a depth of only one km.

The earth continues to tremble in the region. The largest earthquake since midnight hit at 8:53 am and measured 4.5 in magnitude. Its source was 6.3 km west of the town of Grindavík.

To view a table of the earthquakes, see here.