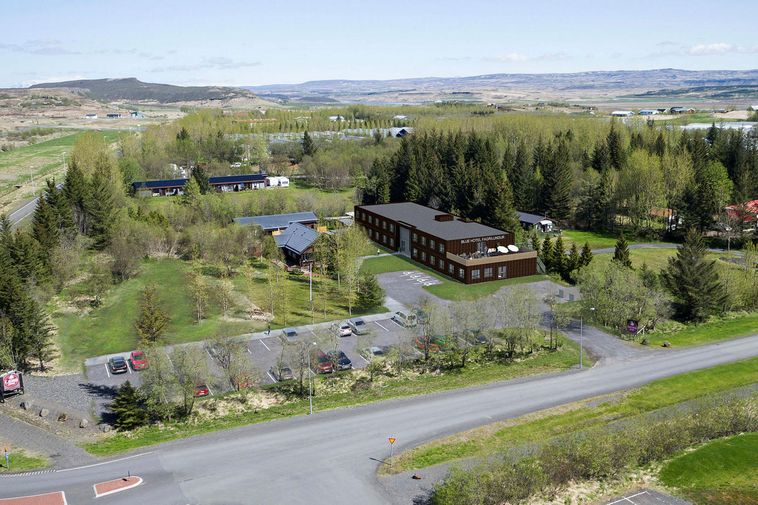 A new hotel, Blue Hótel Fagrilundur, will rise at Reykholt, in Bláskógabyggð municipality, Southwest Iceland, this summer, Morgunblaðið reports. Work on the hotel is underway, and what makes the construction unusual is that the 40-room hotel is being built in units in Norway. The units are expected in Iceland in mid-April, and an opening is planned June 15.

The foundation is ready, and it will only take a few days to assemble the units once they arrive, states Jóhann Guðni Reynisson, managing director of Stök gulrót ehf. – the company building the hotel. After that, an entrance will remain to be built and hallways completed.

An older guesthouse, Blue Grove Guesthouse, owned by the same company, will be converted into a lobby and breakfast room.

Jóhann states that so far, most of the people staying at the guesthouse have been foreign tourists, but this summer, he expects mainly Icelanders, at least in early summer. “The Icelanders prefer having hot tubs, and part of our reaction to the changed circumstances is to set up hot tubs and a spa for the guests,” he states.

“My understanding is that vaccinations are going well in the UK and in the US – countries which have been our main markets, and I hope to see guests from there arriving later in the summer,” he adds.

Organized educational and gourmet walks are planned at Reykholt this summer, similar to last year, when they were very well received. “I’m optimistic that the tourism industry will be in a healthy state this summer and in the future,” Jóhann concludes.