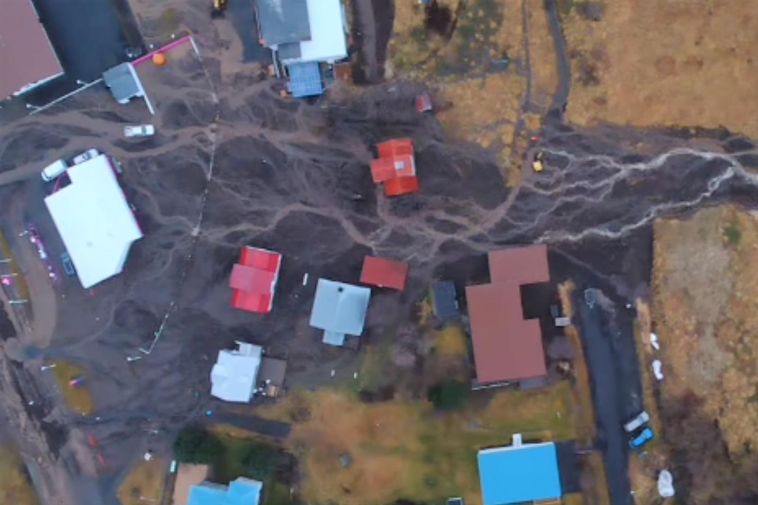 Heavy rain continues in Seyðisfjörður, the East Fjords, today, where 50 homes had to be evacuated Tuesday afternoon, due to landslides. In nearby Eskifjörður, residents in certain areas of the town have been asked to exercise caution and follow developments closely, Morgunblaðið reports.

The Icelandic Met Office has issued an orange weather alert for Seyðisfjörður, due to heavy rain, effective until 9 am tomorrow, Friday. For tomorrow, a yellow weather alert is in effect, due to considerable rain. The rain causes increased groundwater pressure and rising groundwater levels, since the soil is saturated due to rainfall and snowmelt in recent days.

The risk of flash floods and landslides continues. The strain on drainage systems is considerable. An alert phase, due to the risk of landslides, remains in effect for Seyðisfjörður, and an uncertainty phase in East Iceland for the same reason.

On its Facebook page, the Icelandic Met Office posted the video below, shot by Daníel Örn Gíslason, member of Ísólfur rescue team. In it, you can clearly see how landslides surround houses in the town of Seyðisfjörður.

“It’s rainy and windy – lousy weather as we call it,” reporter Pétur Kristjánsson tells Morgunblaðið. “Residents are prepared for further natural disasters, in which case we’ll rely on the rescue team, without which this place would be inhabitable.”

No injuries have been reported, and property damages are yet to be assessed. Much work remains clearing streets and yards of mud.

Yesterday afternoon, it was not considered safe for residents to enter the evacuated area, mbl.is reports.

The situation will be reassessed in daylight. Sunrise in Seyðisfjörður is at 11:08 am today and sunset at 2:37 pm.