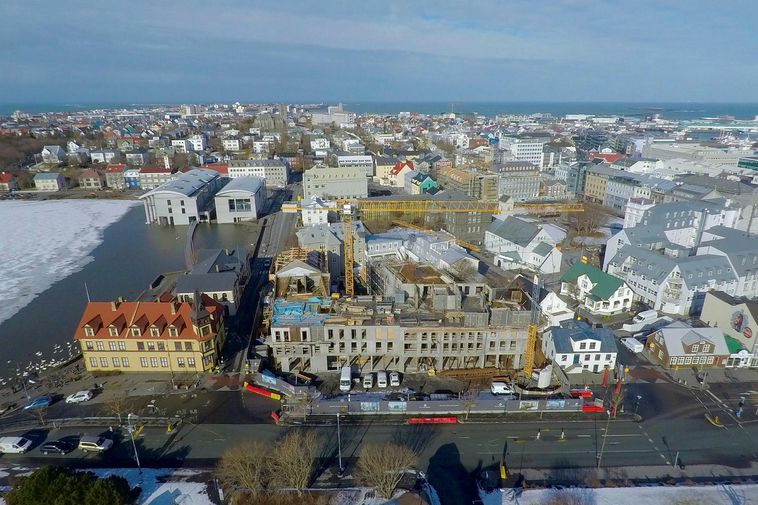 The new hotel in downtown Reykjavík. The Pond is on the left. mbl.is/Hallur Már
Vala Hafstað
vala@mbl.is

Most likely, work on a new hotel on Lækjargata, downtown Reykjavík, will be delayed, due to the situation in society, caused by the COVID-19 pandemic, Ólafur Torfason, chairman of the board of Íslandshótel, the company that owns the hotel, tells Morgunblaðið. The project could be postponed by 30 days, but no decision has yet been made in that regard.

The project has faced delays before – first, an archeological study was done at the site, since the hotel is being built in an area that has been populated since the settlement of the country. On top of that, consideration had to be taken to the fact that the foundations of nearby buildings were not made for steelwalls, such as were used for the hotel, to be installed nearby.

Three of the hotel’s five floors have been erected on the side facing Lækjargata.

As soon as the concrete work is done, windows and window panes will be installed, and outside work completed.

Ólafur states it won’t be long until the area around the building is cleared and scaffolding is removed, bringing traffic on the street back to normal.

The hotel will have 125 rooms.