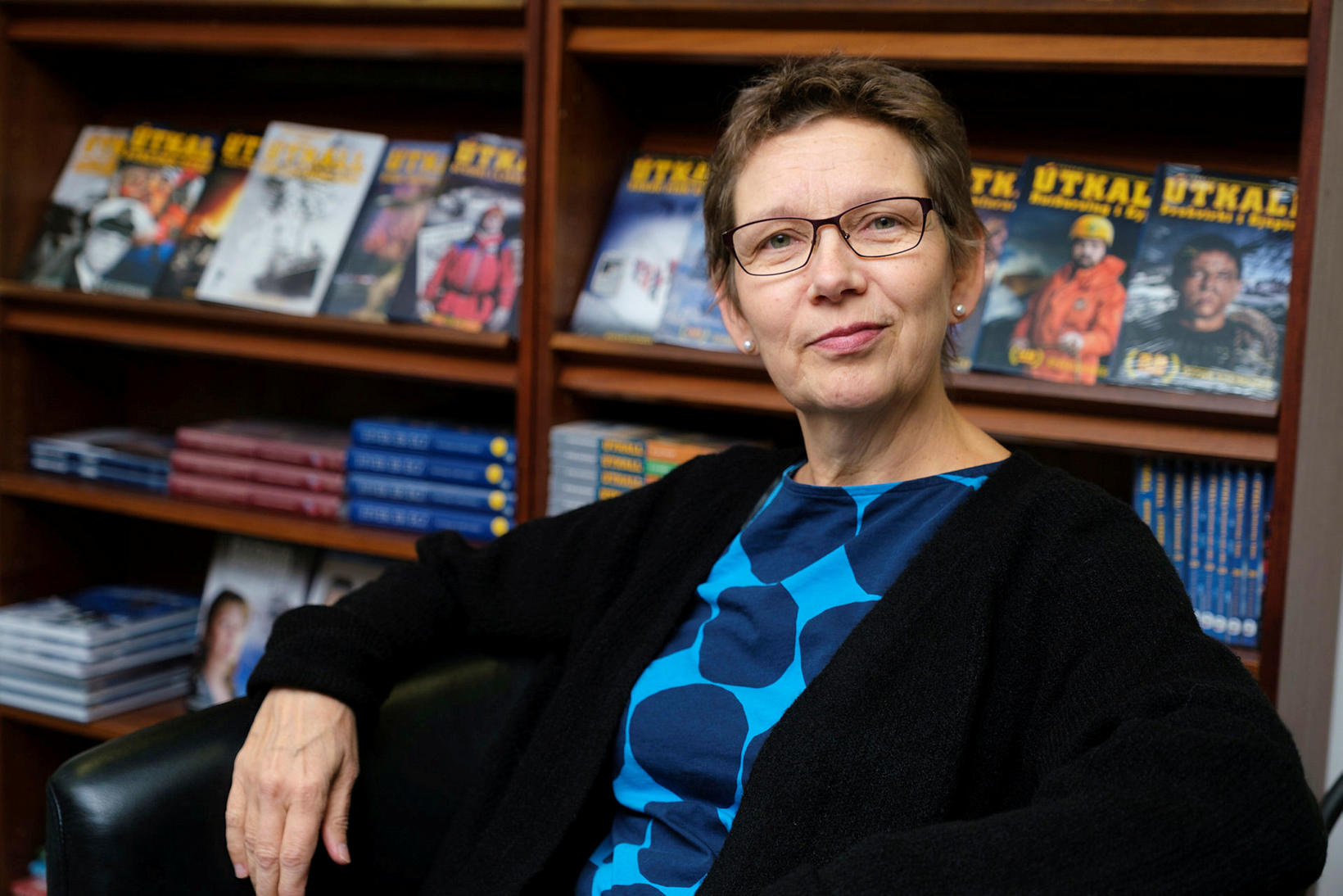 Tuula Hyvärinen, a Finnish woman, survived two plane crashes in Iceland in a single day. She is currently in Iceland, due to the publication of a book about the ordeal, which took place 40 years ago. She was interviewed by mbl.is journalist Þórunn Kristjánsdóttir.

The year was 1979. Tuula and her Finnish friend Maria Elisa Falkenberg had been working in Iceland as physical therapists since January, and before returning home in December, they decided to take a scenic flight over Southwest Iceland. They asked their friend Gérard Delavault to fly them. John Murthag Russell (usually called Russ), their friend from New Zealand, joined them on board the four-seat plane. 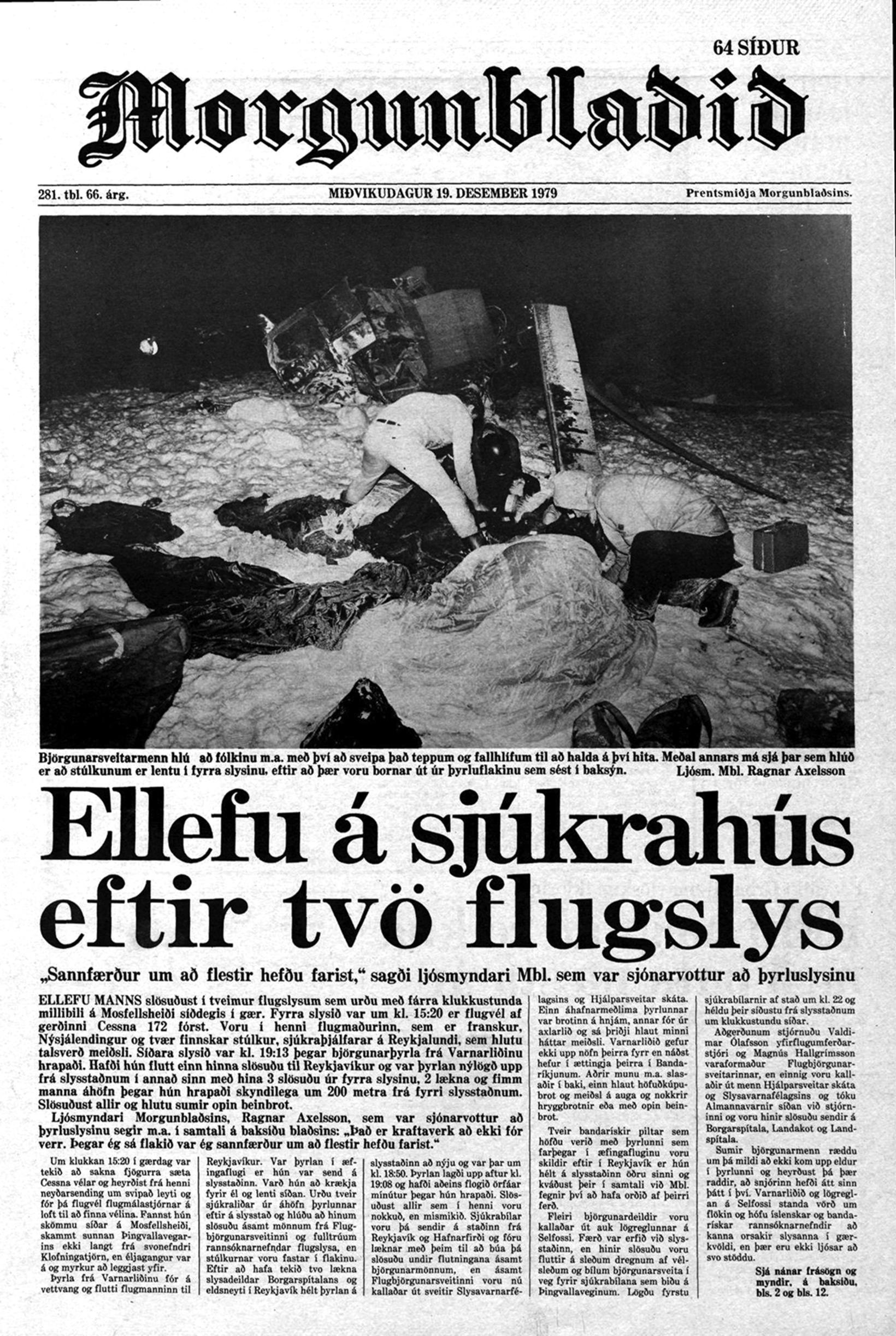 The crashes were reported on the front page of Morgunblaðið. Morgunblaðið, December 19,1979

They took off from Reykjavík Airport and flew over Gullfoss waterfall and Geysir, as well as Þingvallavatn lake. While flying over Mosfellsheiði heath, the plane crashed. All four people were severely injured. They managed to get out of the wreckage and waited for help in the cold. Snow was falling, and their radio was not working, but help finally arrived.

Rescue workers came to the scene, followed by a large US rescue helicopter. The decision was made to first fly Russ to hospital and to bring along two doctors to attend to the rest. 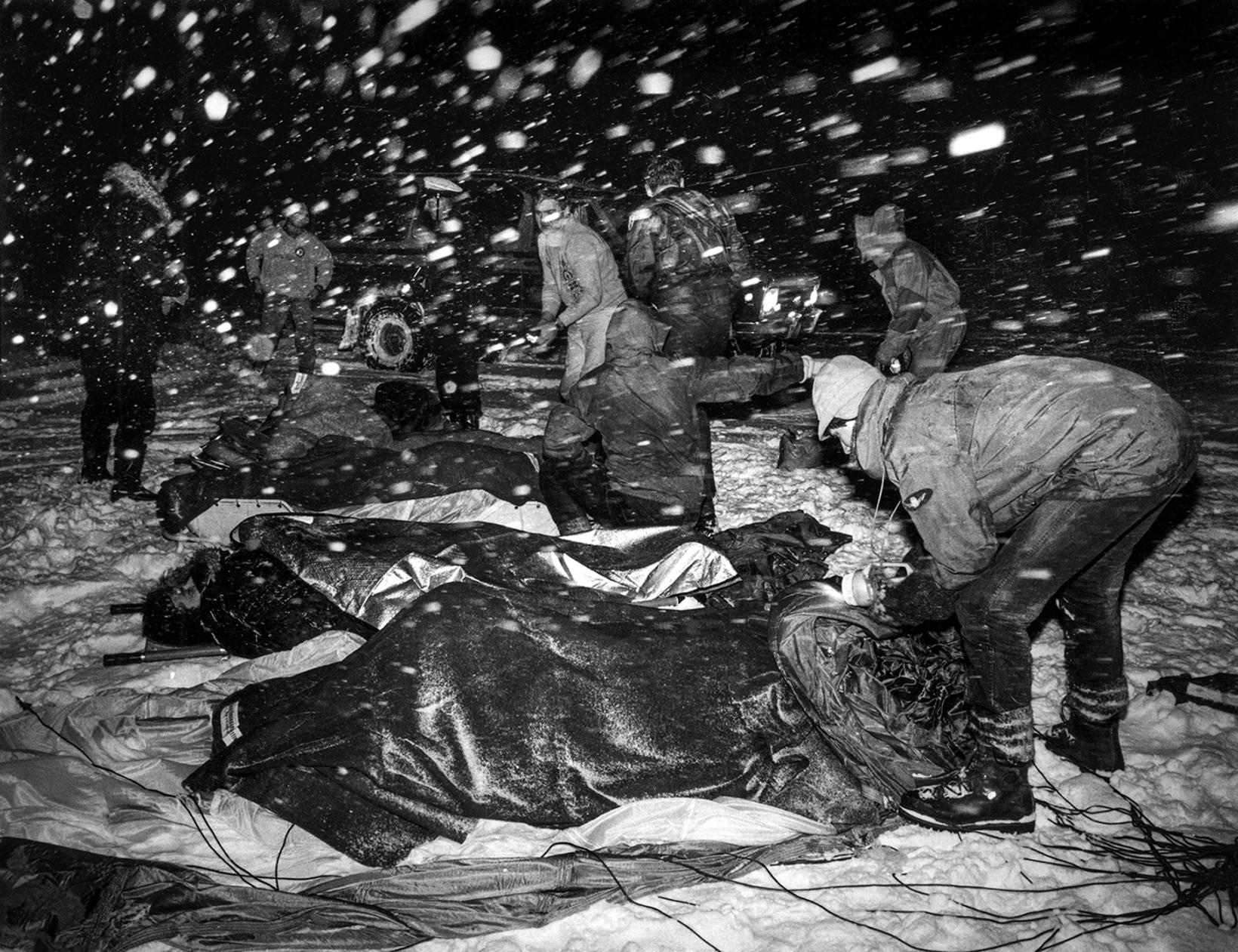 When the helicopter finally had returned and took off again, eleven people were on board, including Tuula, Maria and G érard, the pilot. A few minutes after takeoff, it crashed, only hundreds of meters from the first accident site. “I couldn’t believe this,” Tuula states.

She was able to get out of the wreckage, along with Maria. She was disoriented and received painkillers right away. All she remembers after that is that she refused to board an aircraft again and insisted on being transported by ambulance. 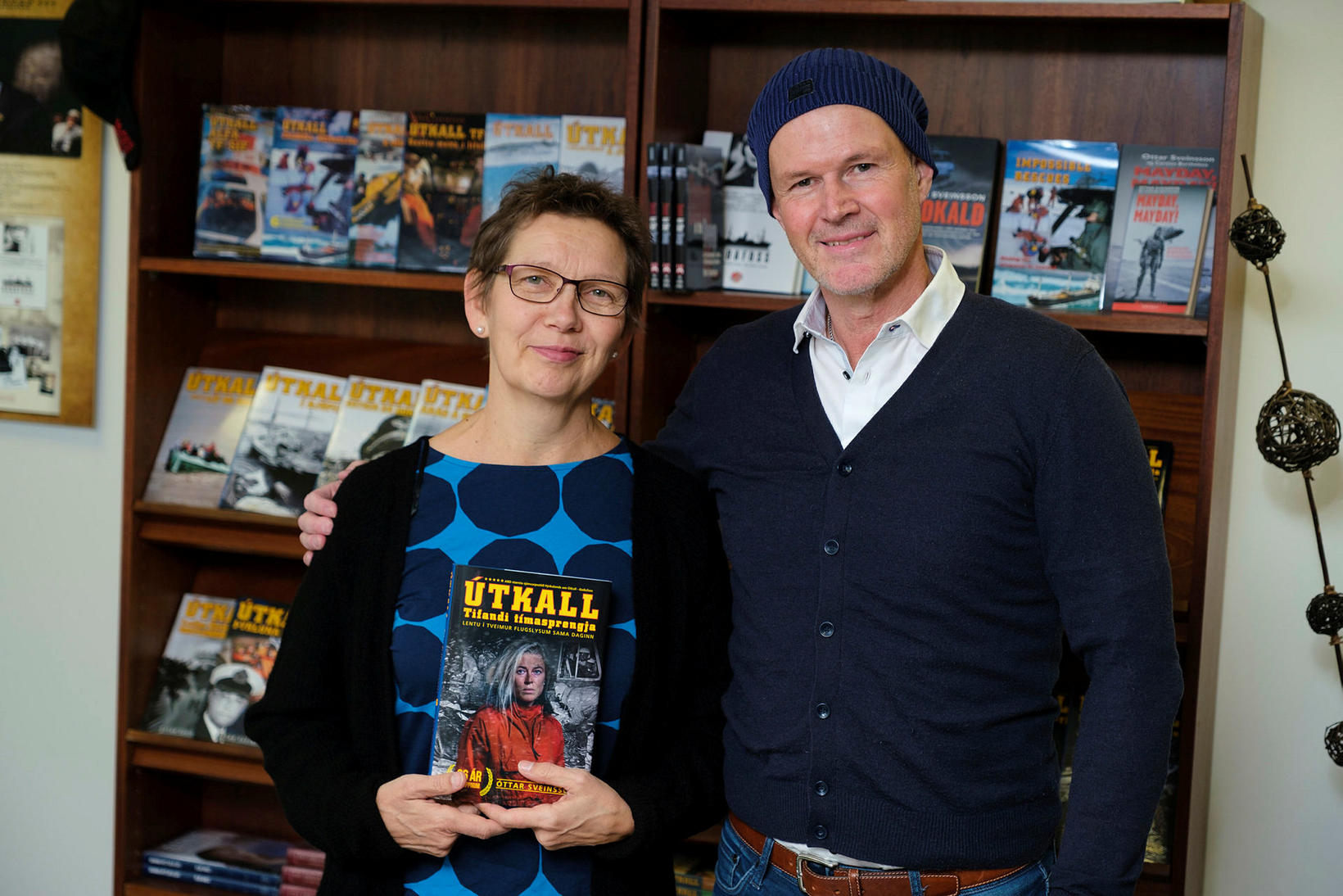 Fuel vapors and sparks were coming from the helicopter, creating a severe fire hazard. Thanks to Hallgrímur Skúli Karlsson, a 19-year-old rescue worker, all the people survived. He risked his life deactivating the helicopter ’s rotors. He was later honored for this heroic deed.

Morgunblaðið photographer Ragnar Axelsson was among those who took part in the rescue effort. He took several pictures at the scene.

After being transported to hospital, Tuula underwent back surgery. She and her friend Maria were hospitalized for months, after which they underwent rehabilitation in Reykjavík, until they finally returned home to Finland in March, 1980. 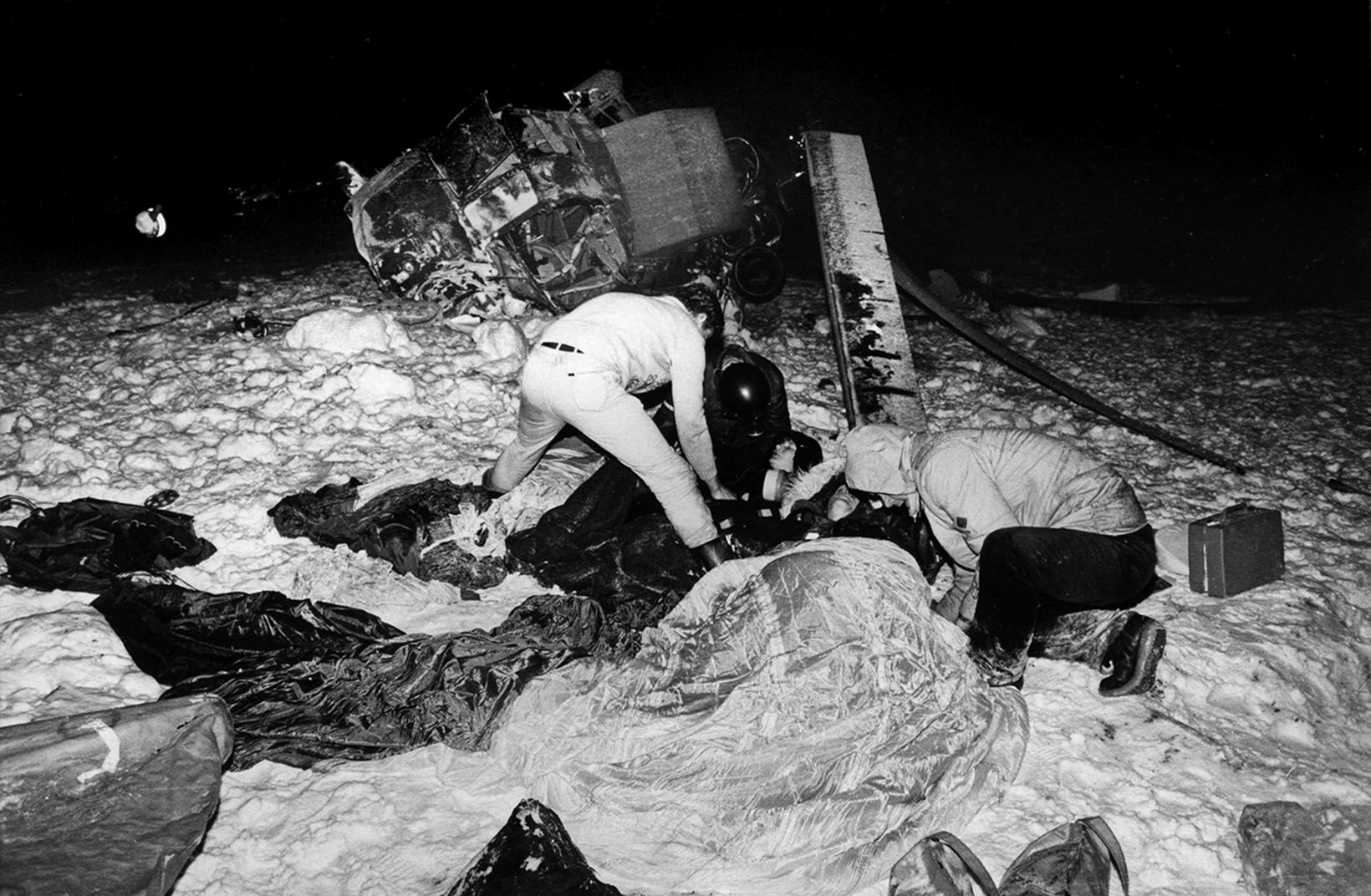 The book that just came out is written by Óttar Sveinsson. It is titled Útkall tifandi tímasprengja , (meaning Emergency Call: Ticking Time Bomb), and it is dedicated to the rescue worker Hallgrímur Skúli Karlsson, who died in 2010, and to Maria Elisa Falkenberg, who passed away in 2014.

After being contacted by Óttar, who showed interest in writing the book, Tuula called Maria ’s sister to tell her the news. “This is a miracle,” the sister responded. As it turns out, she had just discovered a cassette tape, with a recording from her sister when she was in hospital in Iceland, where she describes the accident in detail. “I felt like she was talking to us from Heaven,” Tuula states. “She clearly wanted her voice to be heard.”

Tuula is still afraid to fly, and she is afraid of heights. It took her a long time to recover from the accidents – psychologically, as well as physically. She resumed working as a physical therapist half a year after the ordeal. She still needs to take painkillers for the back pain, but aside from that, she is happy. “I have two lovely daughters and two grandchildren,” she states. “I’m alive, talking to you, and life is good. This book has been a good therapy for me. I’m grateful for having had a chance to tell this story.”